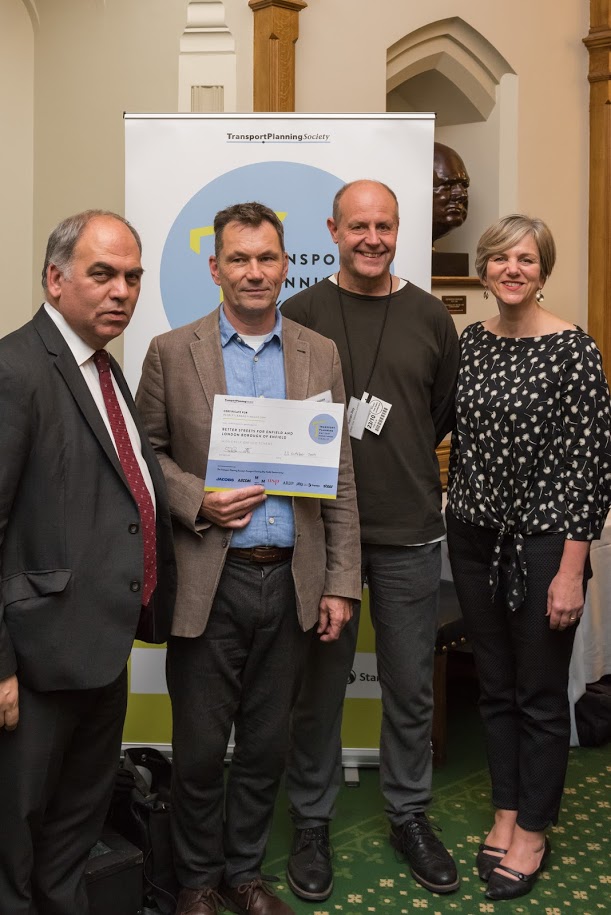 We launched our vision and asks

In May we launched a new vision for Better Streets for Enfield. We’ve always been about “streets for people, not just for cars” – but now we have five key asks for the council to achieve that. Click on a link to read more:

Low traffic neighbourhoods in every ward

A joined-up network of safe, direct walking and cycling routes

20mph as the default speed limit

We had some expert help in the form of Megan Sharkey, a seasoned campaigner who has helped transform streets in Australia. We met as a working group once a month to thrash this out.

So we were delighted when the council decided in the summer to use an LTN approach in their Quieter Neighbourhood programme. After years of failing to close a single road to through traffic and then trialling an ineffective road narrowing scheme, the council Healthy Streets team are now planning to remove through traffic from whole areas. For this we are grateful for the leadership of Deputy Leader Ian Barnes, who has championed LTNs.

Not surprisingly, the unveiling of the Fox Lane plans – as the first area to get this radical treatment – had a mixed reception. A lot of the opposition seems to focus on the details of the design, which would allow only two entry/exit points for vehicles in the whole area. (The council has since suggested that this design will change based on residents’ feedback.) And a new residents’ group, the Fox Lane LTN group, put forward an alternative plan which has far fewer closures but would still keep through traffic out.

These residents, who include members from 13 streets across the area, made it clear that they wish the scheme to go ahead. We await the council decision and a revised design – and the all-important six month trial, so that residents can experience low traffic streets in reality.

The Hertford Road (A1010 South) scheme was finished, creating safe space for cycling from Ponders End in the north almost all the way to the North Circular in the south. Edmonton Green’s roundabout had got a cycle-friendly makeover the year before, and rain gardens and other public realm improvements have appeared along the route. Some of us joined the council-led ride to launch this route and celebrate the emerging network across the borough – read our account here.

Work on the next route, A1010 North (from Ponders End in the south to Southbury Road in the north) is well underway and ahead of schedule.

Enfield was recognised by the Healthy Streets Borough Scorecard as having the greatest proportion of roads with protected cycle lanes anywhere in London apart from the City. This is a great achievement for an outer London borough.

However, much more needs to be done to enable more people to choose a bike for transport. We think the missing link is low traffic neighbourhoods – when these are in place, they will make it safe and easy to cycle from any front door in the neighbourhood to the nearest protected cycle route, and that’s bound to boost bike journeys for all ages.

The council did a lot of work in 2019 to make cycling accessible to all. Read their round-up here.

We ran some fun events

2019 saw our most (insanely) popular Try-a-Bike yet, run with Enfield Cycling Campaign and Cycle Enfield at Palmers Green Festival and featuring bikes lent by our members, as well as inclusive bikes from Bush Hill Park and advice for family cycling from CarryMe Bikes. Over 800 people visited us in Broomfield Park tennis courts!

We also saw the transformation of two parking spaces into some ‘people parking’ in Palmers Green – Devonshire Road’s junction with the high street on Green Lanes was turned into a pop-up parklet for an afternoon. It had its own ‘kid’s corner’! We hope we will see more car parking spaces transformed into spaces for people across the borough – perhaps permanently.

Dangerous driving on the A10 was tackled

I don’t know if we can take any credit for this – but shortly after we published an open letter to Transport for London and Enfield’s police about deadly speeding on the A10, a huge operation began to tackle it. Detective Superintendent Andy Cox is Enfield’s new hero, as he and Enfield police have gone after speeding and dangerous drivers by every means possible (including drones) to great effect. We are in no doubt that deaths have been prevented by this work. You can follow Andy on Twitter at @SuptAndyCox where regular updates on the A10 are posted.

We got some recognition…

Better Streets was shortlisted for the Transport Planning Society’s ‘People’s Award‘ at a reception in the House of Commons in October. It was a great honour to be one of five very strong finalists so we were not too disappointed not to win the actual award. Find out about the whole shortlist here.

We look forward to…

But to get this work done we need more people on board. Can you help? We plan to hold more regular meetings, open to anyone who wants to help make streets better in their area – please join us! Contact us at info@betterstreets.co.uk to volunteer or join our group on Facebook.