May 8, 2018 / admin / Comments Off on Better Streets looks at the local election results

Who are the winners and losers?

Better Streets has taken a keen interest in the local elections – it’s local councils after all who are responsible for most of our streets. We’ve asked each political party leader to take our pledge , alongside the London-wide Liveable London campaign asking residents to email the leaders en masse. The Green party fully supported it and Labour supported the pledge but modified it on the basis of their version of Quieter Neighbourhood (watering it down). While the Conservatives and Liberal Democrats made opposing Cycle Enfield a major part of their campaigns. So what would be the outcome of polling day on Thursday 3 May?

I woke up early on Friday to watch all the final results come in for the Enfield wards. I live in Winchmore Hill ward, and the results were last to be announced.  Palmers Green had again solidly returned three Labour councillors, and so had Southgate Green – and this ward originally only had two Labour councillors, so it was a gain. There was also a Labour gain in Southgate ward but that looked tight. Winchmore Hill was an important ward as most of the anti-cycle lane campaigners seem to focus on it as an area where they thought there were the most problems. Oddly, much of Palmers Green is also in the ward, so in effect Winchmore Hill has two of the most important town centres affected by the work of Cycle Enfield. Would Winchmore Hill vote in the three Conservative candidates who so opposed our new cycling infrastructure? When the result came in I posted a rather bleary-eyed tweet complete with typos:

“I have just woken up to see my ward results. The two most ant-cycling Conservative candidates were not elected. In fact we had a pro-cycling candidate Labour gain. Once again being anti actuve travel is not a vote winner. Stop politicising active travel!”

My take on the results was also posted on Facebook “My reading is that the new infrastructure going in on the A105 was not a vote loser and possibly a vote winner (or just noise)”.

Once again being anti active travel is not a vote winner. Stop politicising it! 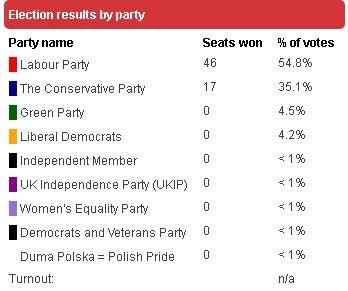 Overall for the borough, Labour received 54.9% of the votes and 46 councillors (up 5 on 2014) and the Conservatives 35.2% and 17 councillors (down 5 on 2014). The Greens did well and beat the Lib Dems but neither gained any councillors. The Lib Dems also had a very negative anti-cycling manifesto and were beaten  the Green Party.  Their leader, David Mitchell came last in the Southgate Green ward – being beaten by his two colleagues (although to be fair this could be to do with the alphabetical order).

Why these results matter

It feels like we have been waiting for the results of this election for over a year now. It isn’t that the council isn’t getting on with finishing the cycle lanes and planning the next set of routes – they are. But our concern is that the Quieter Neighbourhood schemes were unadventurous and slow to develop. We get the feeling that the council wanted to see what the electorate thinks of the changes – if they really were deeply unpopular, perhaps the plans should be scaled back…

For Better Streets for Enfield this isn’t a party political issue. We will work with any political party, and in fact were pleased when Joanne Laban took control of the local Conservatives. She was the co-author of the original Mini Holland bid together with Labour’s Chris Bond. 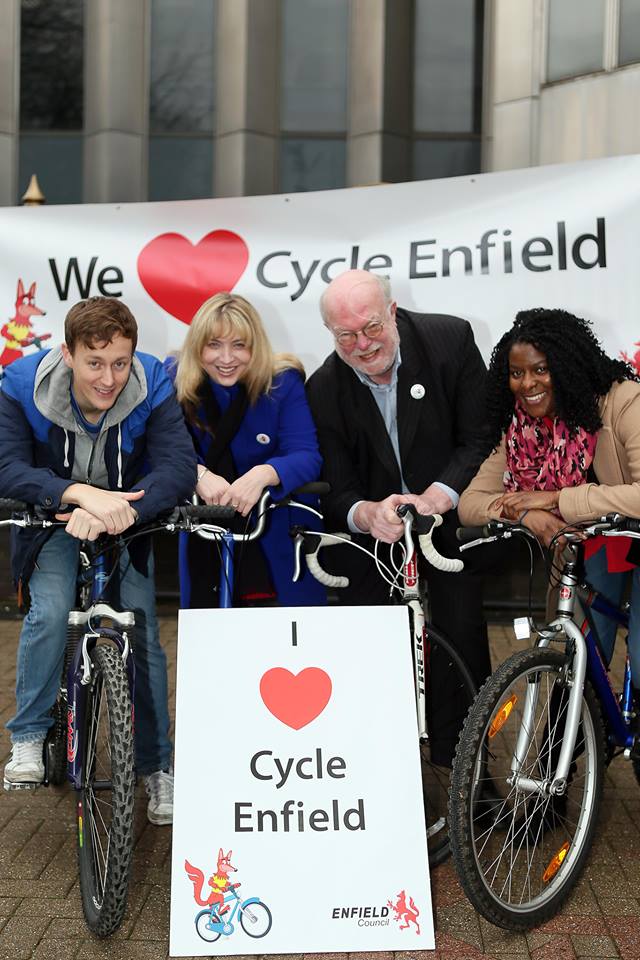 However after writing several emails to her it was clear she wasn’t going to engage at all. It also didn’t take long for her election strategy to become apparent. In a complete change of heart she was opposing all new cycle lanes and going to rip up the important bits of the infrastructure – namely the bus stop boarders and orca separators. So for us this election really mattered.

Enfield is a big borough. It is often said that it is split in two – namely the east and the west. The east is the poorer part of the borough, for example Edmonton and Ponders End, while the west is more affluent. Traditionally the richer parts would vote Conservative and the poorer parts Labour. Nowadays it seems to be even more split. Parts of the borough seem to have been “Islington-ified” – the constituents are reasonably wealthy but vote Labour on the basis that, perhaps, they think the wealth should be more evenly distributed. The northern parts of the borough house some of the wealthiest in our society, with gated communities and also some of the aspirational rich – these are solidly Conservative. This information is important so we can work out trends and if indeed calming traffic and encouraging active travel is a vote winner or not.

For Better Streets for Enfield this isn’t a party political issue. We will work with any political party

There was also a very dirty campaign against the cycle lanes that spilled into the election campaign. One of the candidates, Paul Mandel, is a founder member of anti Cycle Enfield group Save Our Green Lanes and runs a Facebook page, Green Lanes SOS. Our members were called such things as “cycle Nazis” or “gestapo” and generally abused before being banned. Of course this is unacceptable for a Conservative (or any) candidate, so we lodged a formal complaint with Joanne Laban as leader. We asked for an apology and for the comment to be removed but there was no action. Who knows how many people see this on social media or if it spills into real conversations? Possibly more than we think.

Winchmore Hill – and other swing wards 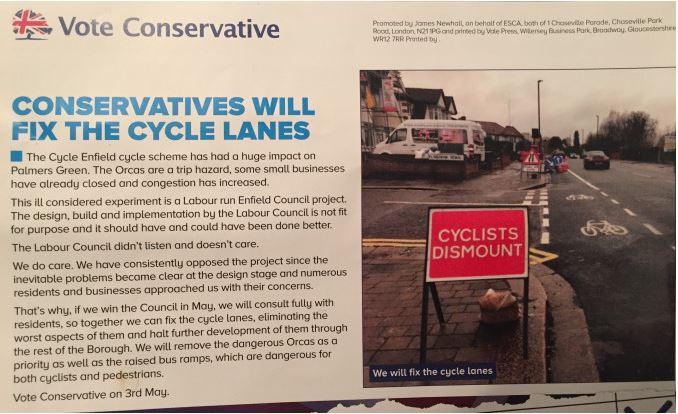 Winchmore Hill is a swing ward. Prior to the previous election it had three Conservative councillors but in 2014 Dinah Barry was elected as a Labour councillor. Overall London is becoming more “Labour” – so given that trend, we should expect Dinah to be re-elected and possibly another Labour councillor too. However, there was a lot of talk on the doorstep about the new infrastructure and apparently not all of it positive. Much of it was people feeling that they “hadn’t had a say”. This gets to the heart of how you do consultation and engage people – this needs to be done well, but without giving the public a veto on installing infrastructure for active travel. It isn’t a referendum after all!

Consultation should be done well, but without giving the public a veto on installing infrastructure for active travel

The other ward that is interesting is Southgate Green. Previously with two Labour and one Conservative elected in 2014, in 2018 three Labour councillors were elected – all with increased majorities. Southgate ward gained a Labour councillor but it was very tight (and a bit away from the new infrastructure). Also near the route is Bush Hill Park, which lost its one Labour councillor and all the Conservatives increased their majorities. Another very interesting ward is Bowes. Bowes elected three Labour councillors but a Green party candidate, Liz Wright, came fourth rather than a Conservative – in fact it was a Conservative candidate that came last (probably as he was a refugee from another ward and was only put forward to make up the numbers anyway). But could this be the future – a Labour ward with Green challengers and possibly a Green councillor? That really would be like Islington! 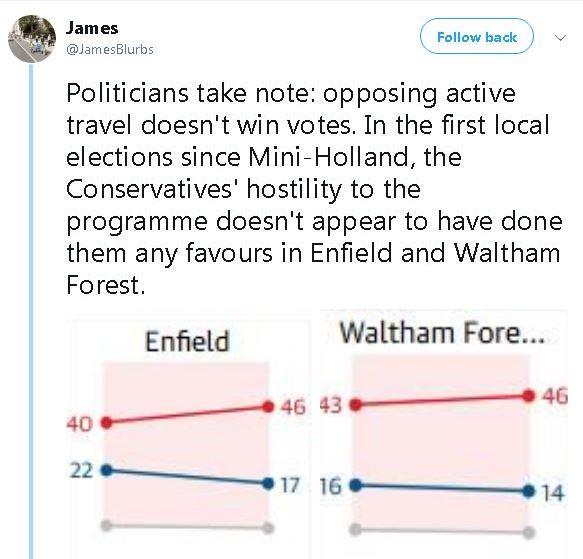 Lessons for our leaders

What does this all mean for London boroughs who are afraid of putting in cycling infrastructure due to a voter backlash? Look at Waltham Forest, where the Labour council who built their ‘Mini Holland’ also came away with more councillors. That suggests that cycle infrastructure, and low traffic neighbourhoods (pioneered in Waltham Forest), are not vote-losers. In fact one main lesson seems to be not to make ‘halting the cycle lanes’ a central plank of your campaign, as the Conservatives and Lib Dems did – and lost votes. Concentrate on the bins, as is traditional!

Another lesson for Enfield is to be bold early on in your term. Now that our council has a new, stronger mandate from residents, we call on them to be bolder with the Quieter Neighbourhoods programme. The election campaign showed us that the idea of removing through traffic from neighbourhoods, not just calming it, is popular on the doorstep – so let’s make genuinely quiet low traffic neighbourhoods as they have in Waltham Forest. Go on Enfield, be bold – what have you got to lose?