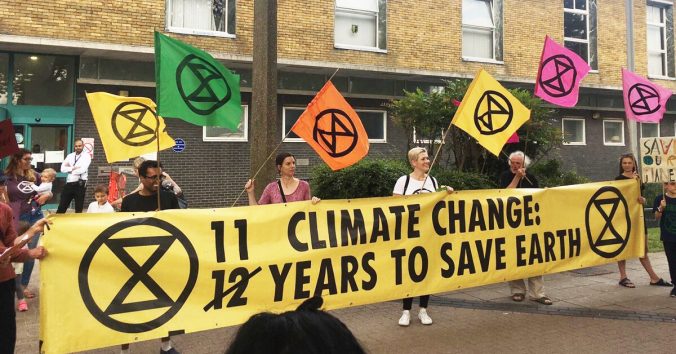 On Wednesday 10 July, the evening that Enfield Council declared a climate emergency, the local Extinction Rebellion group held a good-natured protest outside the Civic Centre. There were banners, speeches and even a bit of singing. I got to say a few words on behalf of Better Streets…

Enfield Council has declared a climate emergency and set a target of net zero greenhouse gas emissions by 2030. Great! Now what? What can it do to reach that target?

The UK’s transport sector is now the biggest producer of greenhouse gases in the UK, and that’s mostly road transport. So if we’re going to talk about zero emissions, we need to talk about CARS.

In Enfield we’re addicted to our cars. There are too many cars making too many journeys. We’re among the worst London boroughs for number of miles driven per year, and it’s growing yearly. So is car ownership per household. Many of our car trips are 1km or less. 80% of our car journeys could be cycled in 30 minutes or less. So to our shame, we are contributing to a global climate crisis.

At this point, people start talking about electric cars as if that’s the only change we need to make. It’s not. They may be better than petrol or diesel, but electric cars still pollute – through their tyres, brakes and road surfaces. And electric cars are still cars. They congest, they cause danger, they keep us sitting down when we should be moving around. Electric cars are not going to solve the inactivity crisis and all the health problems that ensue.

Okay, we can’t get rid of cars altogether. Some people are always going to need to drive some journeys. But if we’re going to be carbon neutral by 2030, we need a lot less driving in Enfield, especially those short unnecessary journeys.* So what’s the solution? We need to reduce demand. Fortunately, there are tried and tested ways to reduce motor traffic that this council can put into action.

First of all, close rat runs. Keep through traffic on main roads where it belongs, and open up whole residential neighbourhoods to walking, cycling and community. We know from numerous studies that this reduces demand for driving and cuts traffic by about 15%. We have yet to see a single closed road in Enfield from the Mini Holland funding. However, the council has the opportunity tonight to pass a motion brought by Cllr Ian Barnes to make low traffic neighbourhoods council policy and roll them out across the borough. Please don’t pass it up.**

Second, keep building safe space for walking and cycling on main roads. The fact that I cycled over three miles to this meeting tonight, on protected bike lanes for nearly all of it, tells me that Enfield is going in the right direction. The more you prioritise people over cars – with safe crossings, wide pavements and protected cycle lanes – the more attractive and convenient active travel will be. Reallocate space on our streets, both road space and kerb space. If you build for cars, you will get cars – and more greenhouse gas. If you build for people, you will get healthier, more active people, fewer road casualties – and less greenhouse gas. What’s good for people is good for the planet too.

If the council carries out these measures (and our other asks) there will be controversy. The council will get flak. But we urge councillors to carry them out anyway, because it’s the right thing to do. An emergency calls for radical action. And not only will these changes be good for public health in the short term, but they will be good for the health of the whole planet in the future.

*Friends of the Earth say that “emissions from cars in urban areas is where significant and rapid carbon savings can be made while improving the quality of life for the 80% of people living in towns and cities… we will need to reduce demand for car travel significantly, in addition to a rapid transition to electric vehicles, if we are to limit global warming to 1.5°C above pre-industrial levels”. See https://policy.friendsoftheearth.uk/insight/net-zero-carbon-budget-whole-transport-sector

**In the event, there wasn’t time to discuss Cllr Barnes’ motion, which will now be debated in September.