The A105 scheme was not a one-off.  It was the first of several major routes in Enfield that will get the Cycle Enfield treatment, adding cycle infrastructure, remodelling junctions and making public realm improvements to miles and miles of A-road. Next up, and making good progress, is the Hertford Road or A1010 South route – from the North Circular up to Ponders End town centre. It will be followed by the A1010 North, from Ponders End to Waltham Cross. 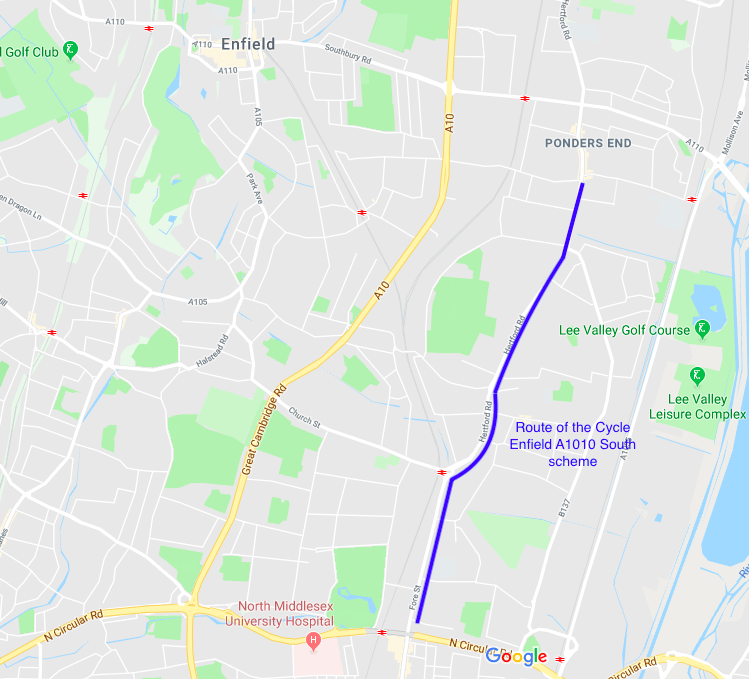 When it’s finished, the Cycle Enfield scheme will have created a cycle network covering the A105, A1010 South, A1010 North, Enfield Town and an east-west link between Enfield Town and the A1010

Last month a group of us from Better Streets and Enfield Cycling Campaign got to ride the route with Richard Eason, head of Cycle Enfield. Here’s what we found. 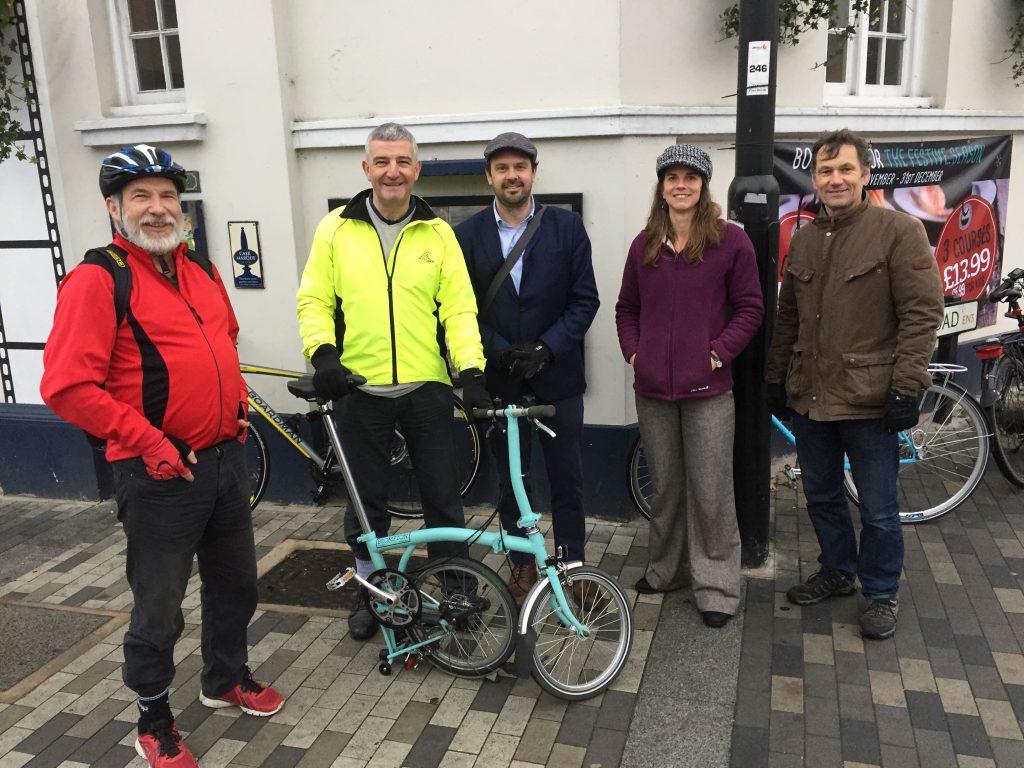 Some of us came from the west of the borough, using newly constructed (but not yet signposted) Quietway 18 along Salmons Brook. We (Alex, Paul, Clare and Hal) met Richard at Edmonton Green station, along with Cycle Enfield team members Lars Chresta and Liz Rhodes, outside the shiny new cycle hub. 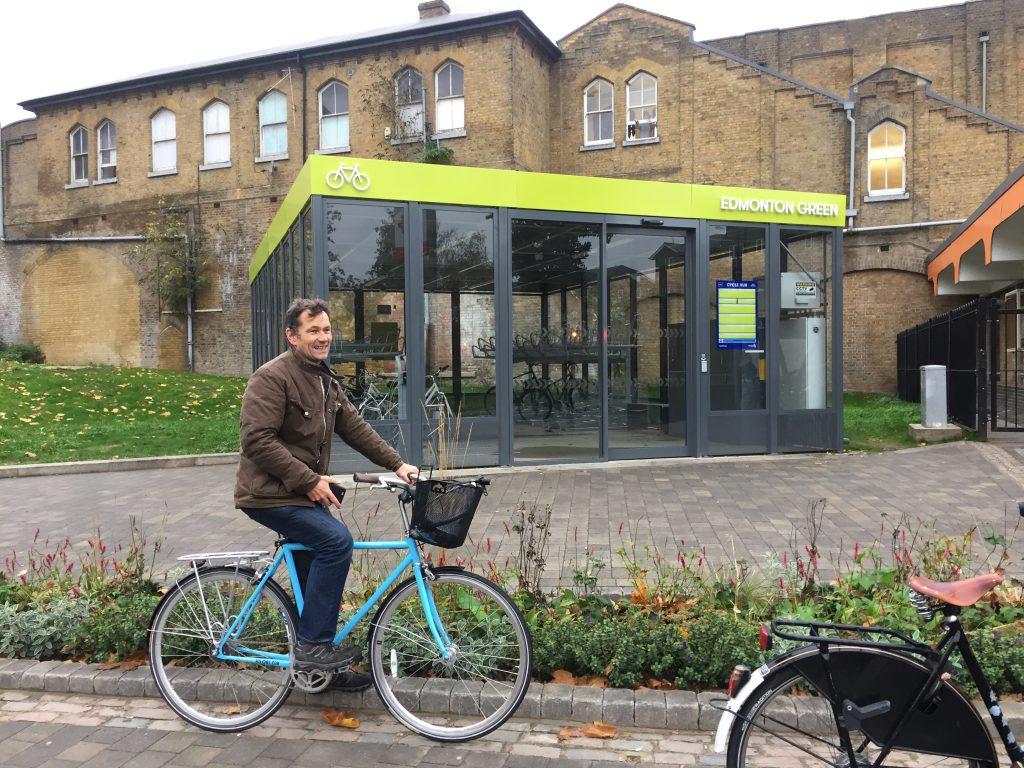 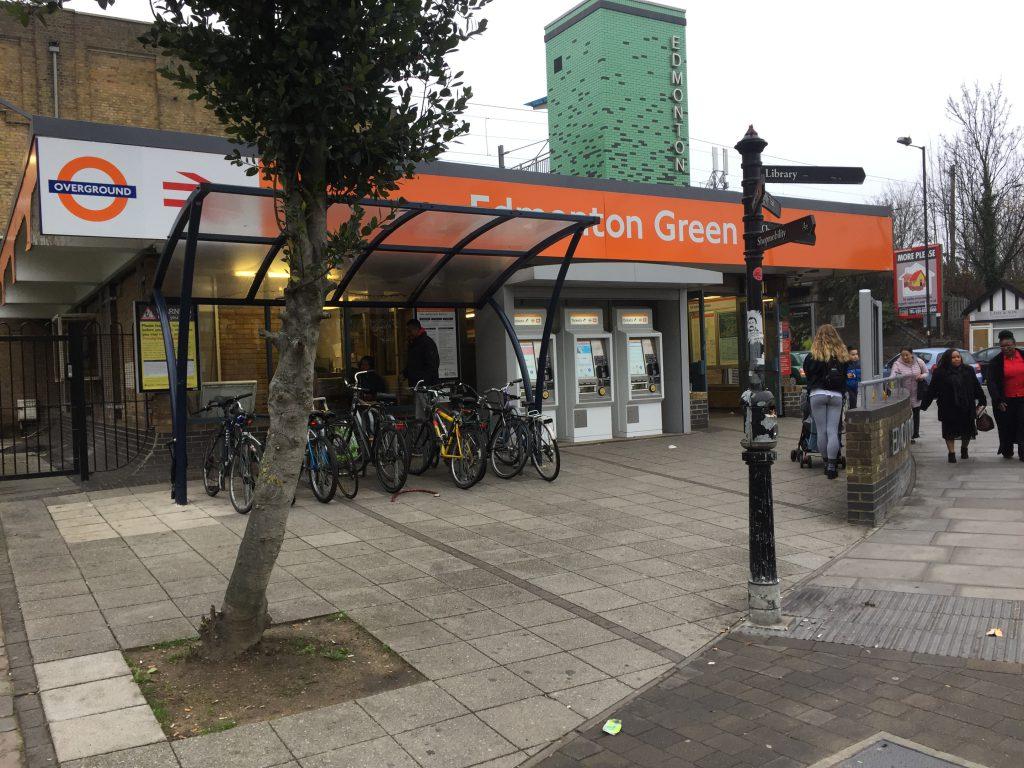 The existing cycle parking is well used, both inside and outside the station

Just south of the station, Richard pointed out a brand new cycle track bypassing a bus stop (see below). He told us that the thinking around bus stops and cycle infrastructure has evolved recently, and it’s now considered best practice to mark crossings for pedestrians over the cycle track. This is going to be applied to the A105 as well. 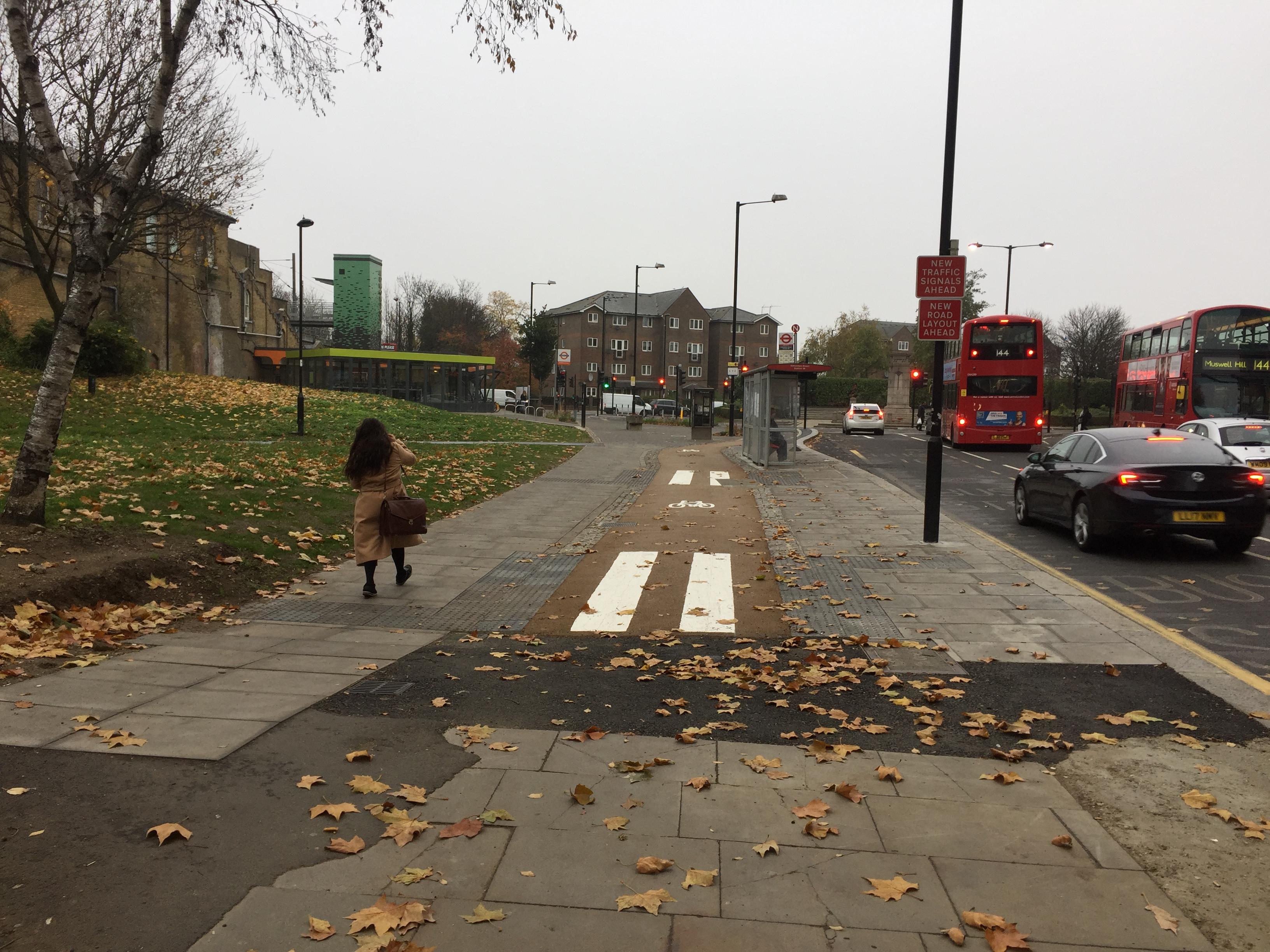 The changes to Edmonton Green roundabout are complete and it’s already being used by cyclists. It gives bikes  a protected lane all the way around, with cycle signals before exits to prevent drivers left-hooking bikes as they turn off the roundabout. 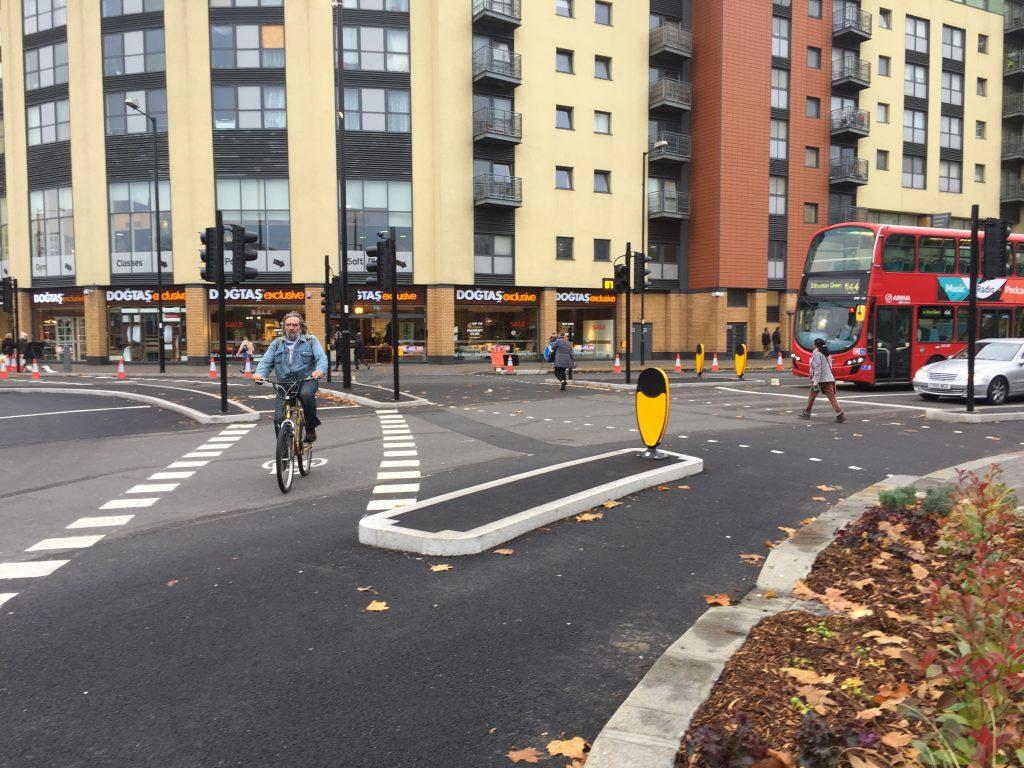 Cycle infrastructure on the south side of Edmonton Green roundabout 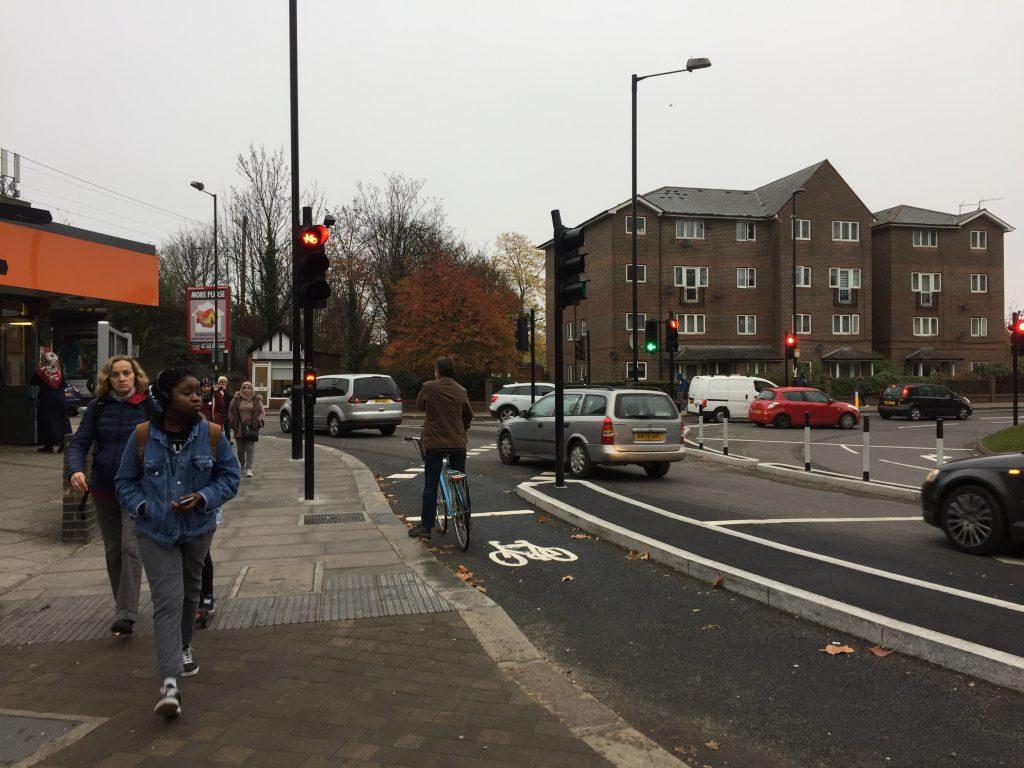 This is transformational – it’s much safer to cycle on this roundabout that was previously so hostile. However, having to stop several times as you ride around can also be frustrating. We saw some people riding with the motor traffic (not illegal!) to make their journey quicker. For instance, there is no option for bikes in the photo above to turn left onto Church Street with turning motor traffic, even though that movement wouldn’t be dangerous – you have to wait.  We wondered whether cycles could have a green filter arrow at this point. 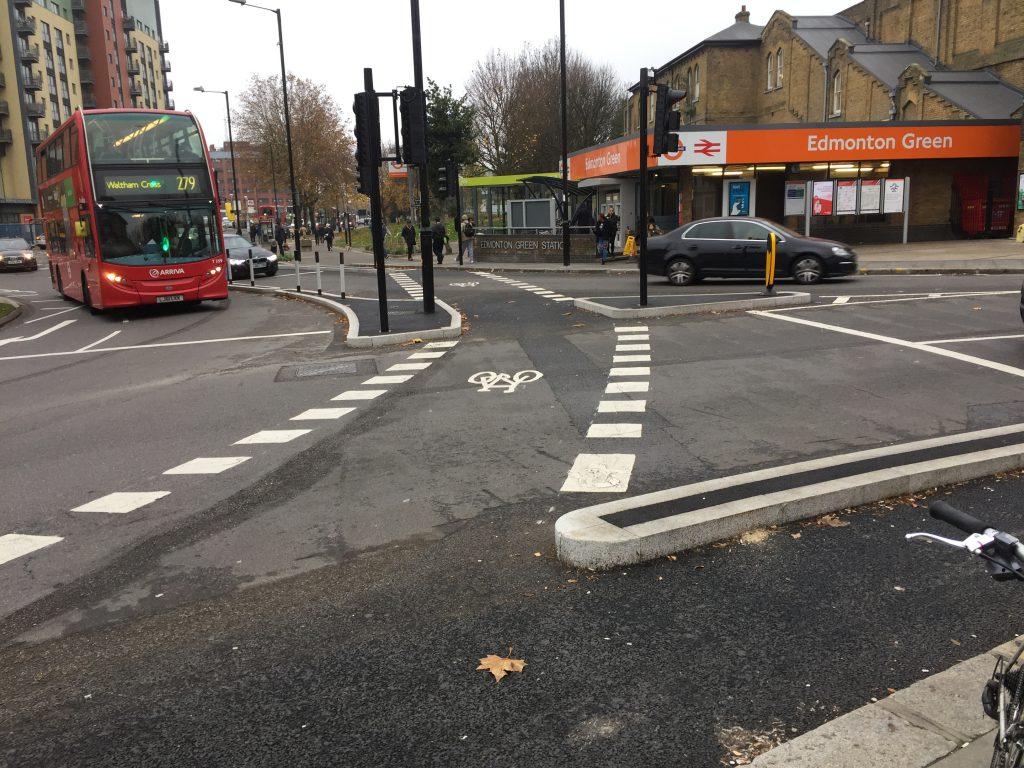 Looking back across the Hertford Road junction with Church Street N9

Improvements could also be made for pedestrians at the roundabout. With the old guard rails gone, you can in theory cross the road wherever you like (this is considered much better by road safety campaigners). One obvious ‘desire line’ is shown in the photo above – from Edmonton Green station across Church Street, in order to walk north up the Hertford Road. This would be easy to do with the guard rails gone and a pedestrian refuge in the middle – but there are no dropped kerbs for wheelchairs or baby buggies.  Would this not be better with dropped kerbs at a minimum, and preferably a formal pedestrian crossing? 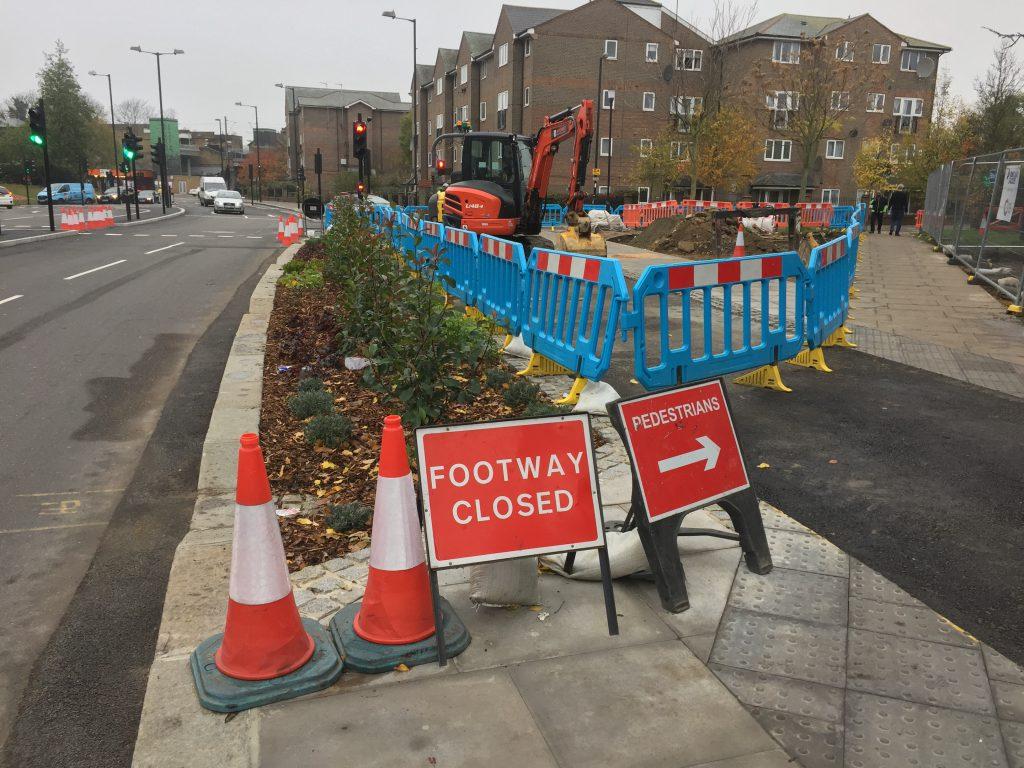 As we rode north on the Hertford Road we saw rain gardens already planted up between the cycle path and the road. These are very welcome not just to help drainage but to create a nicer, greener environment, dividing people from traffic. The scheme gives scope for planting, seating and possibly public art at places like this, a triangle between Hertford Road and Balham Road. 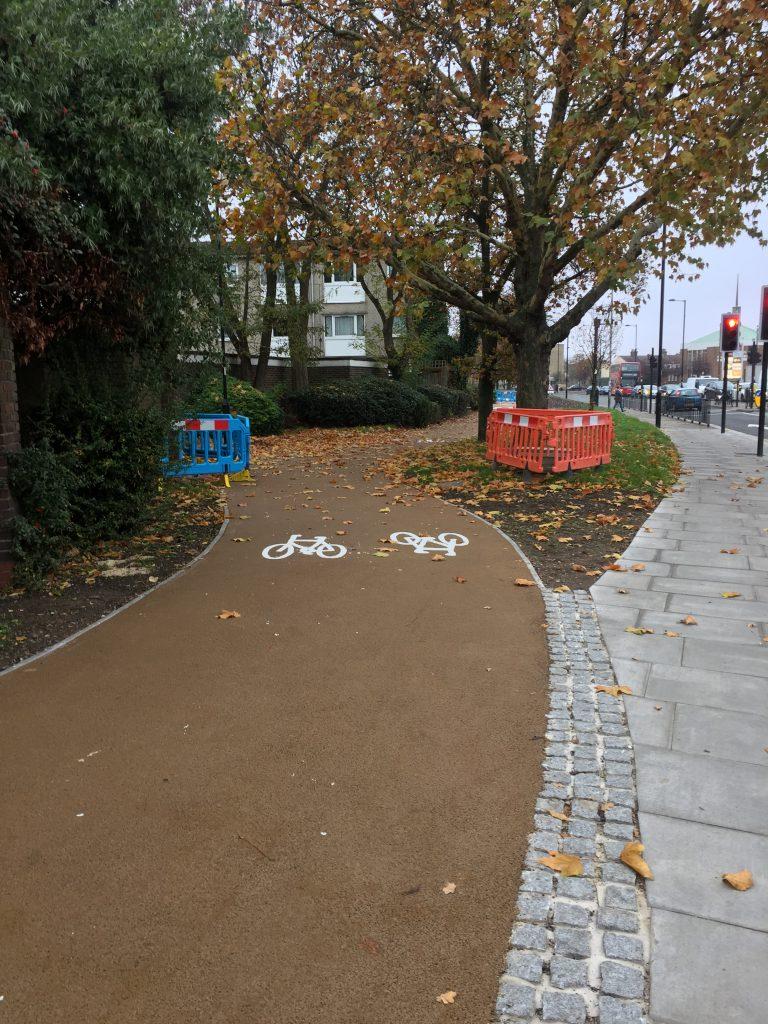 A stretch of two-way cycle track opposite the bus station

The cycle route is two-way for a stretch as you head north and pass Edmonton Green’s bus station on the right. The photo below shows a section that hadn’t yet been replaced with two-way cycle track. 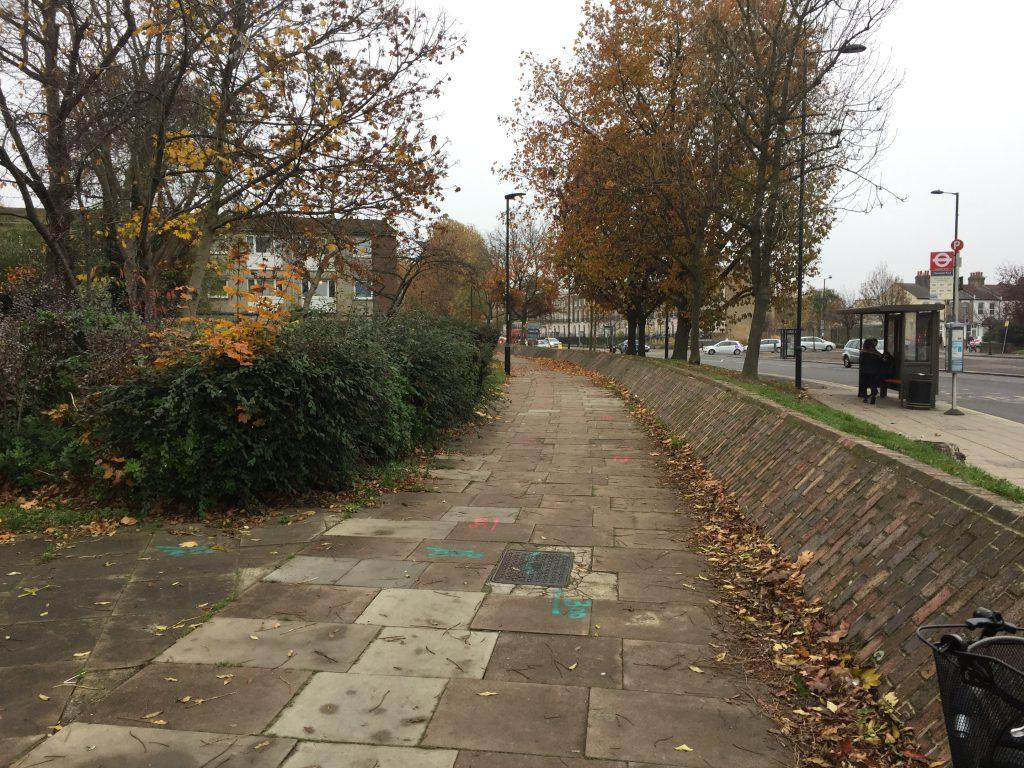 Half a mile north of the junction with Bury Street we came to a completed stretch that looks much like the A105 – on the left is a bus stop with a shared use bus boarder, and on the right the cycle track is separated from the carriageway by ‘floating’ parking bays. 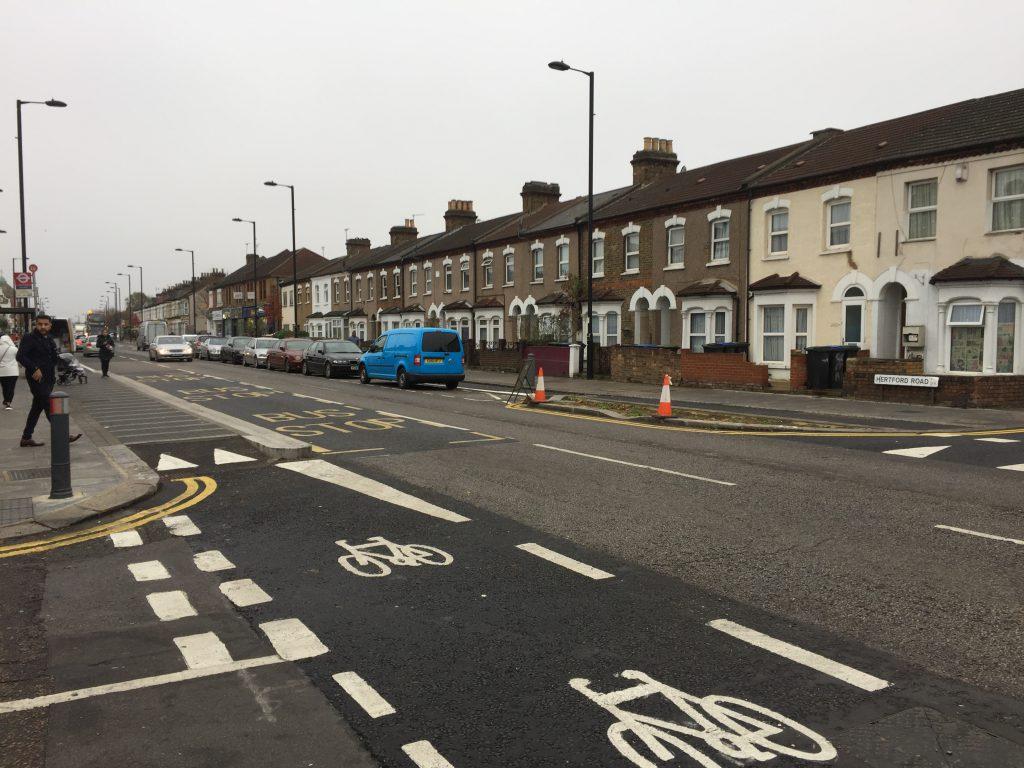 Hertford Road, junction with Sutherland Road and Grosvenor Road. Shared bus boarder on the left, while on the right the cycle track runs behind parked cars 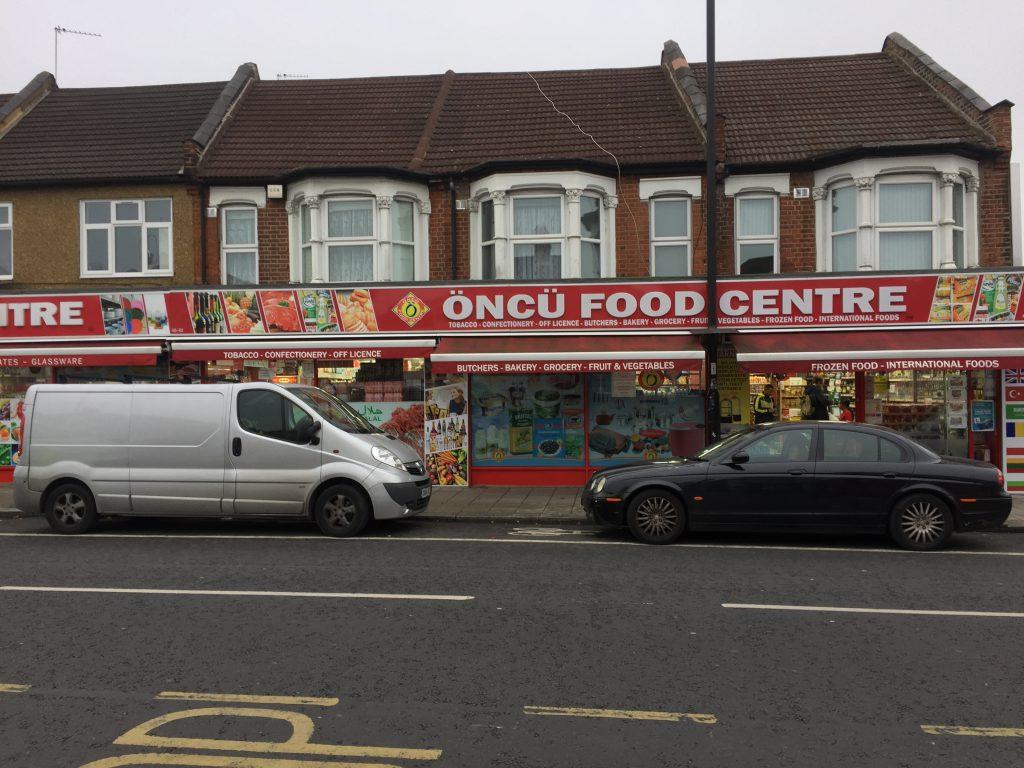 To the endless frustration of people starting to use the new cycle lanes, they are being made useless by parked cars. Richard explained that enforcement can’t reasonably begin until there is more of a joined-up route. He also said that all ambiguity will be removed by adding double yellow lines within the cycle lanes – to both the Hertford Road and A105 routes. This is very welcome news. 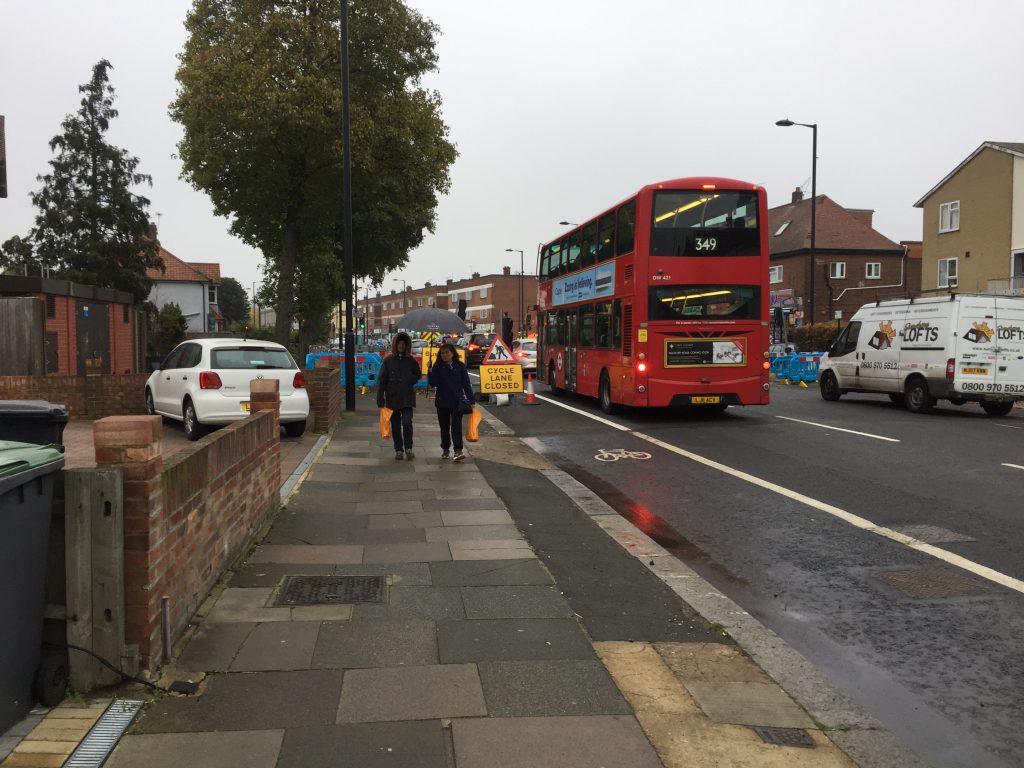 So the route was not joined up yet – but during our visit the Nightingale Road junction was close to completion, and the next project was to be remodel the Bury Street junction  by removing the mini roundabout and signalising it. When that’s done there will be a complete stretch of cycle infrastructure all the way from Bury Street to Ponders End town centre – just over a mile. At that point the segregation – orcas etc – will be added and, hopefully, parking enforcement will begin in earnest.

Our ride ended at the south end of Ponders End high street, where the A1010 meets the completed town centre. We’ve had a look at the work done here in a previous post. Opinion is still divided over the implied roundabouts and crossings. While traffic flow seems to be improved by the roundabout design (see the video below), some people tell us that they have nearly been hit by drivers as they use the implied zebra crossings.

There is a good case for making them much more visible, i.e. black and white like a conventional zebra crossing, rather than black and red. 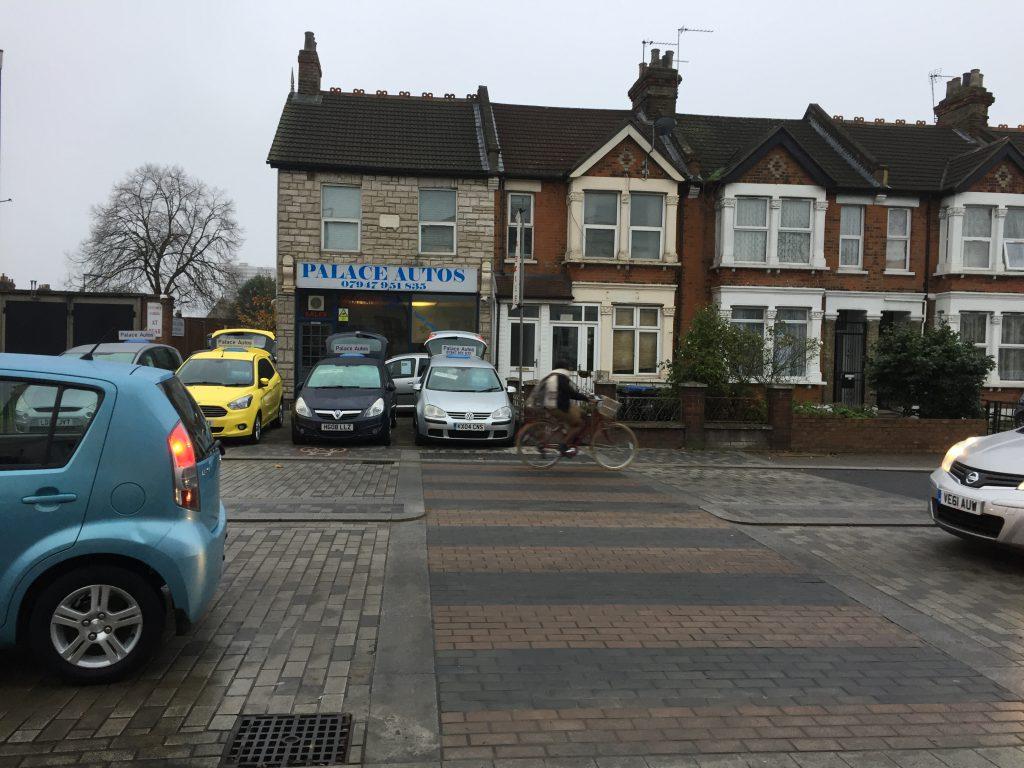 Implied pedestrian crossing in Ponders End. Is it too subtle for drivers to see that pedestrians have priority?

But overall,  it’s great to see such a positive change taking place to a once hostile and dangerous road. I was struck by how many people are already cycling on the Hertford Road before the cycle lanes are even useable. Perhaps people are more ready to take up cycling as transport east of the A10? After all, when Enfield had dockless hire bikes earlier this year, the data showed that they kept migrating to Edmonton.

It’s easy to imagine that when this route is finished, it will make a real difference to how local people get around.