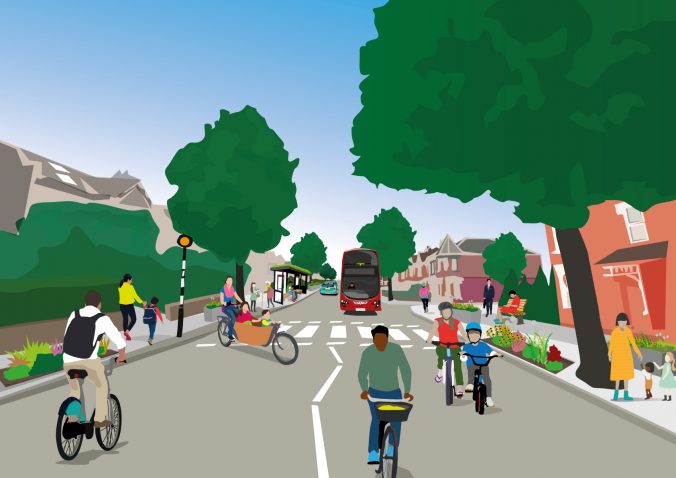 Brownlow Road or Brownlow Boulevard? What used to be a toxic, congested road can become a vibrant hub for people and public transport.

We are a community group with the ambition to reimagine the streets in the Bowes/Bounds Green area. We want a better balance on our streets between cars, bikes, pedestrians, and public transport users, to make them safer, healthier and more people-friendly. Not many of us cycle and most of us drive – but we all agree that streets dominated by cars don’t work for anyone.

We support an area-wide low traffic neighbourhood that includes appropriate traffic reduction measures on Brownlow Road, eg. a timed bus gate, so that:

Brownlow Road, Warwick Road and others in the area have been carrying massive levels of through-traffic, resulting in noise, air pollution, road danger, hindrance of buses, and discouraging active travel. Yet this is a residential neighbourhood.

The way the roads are designed makes these streets the unfortunate shortcut for drivers cutting a corner off the A406. We don’t think that’s fair; A-road traffic should stay on A-roads.

Very broadly, tranche 1 is to support the installation of temporary projects for the coronavirus pandemic, whereas for tranche 2 funding (the remaining 80% of funds), councils will have to submit even more ambitious plans that have a longer term focus.

Local authorities are now required by law to reallocate road space for active travel as an alternative to public transport, as lockdown eases, to mitigate congestion and prevent a surge in motorised traffic.

Brownlow Road has been identified by TFL as a strategic cycle route. A bus gate would improve bus services and make it safe for cycling.

Low traffic neighbourhoods: before and after

How does it work?

Low traffic streets reverse the pecking order: kids can play, people of any age can walk or cycle, neighbours can socialise – and cars are ‘guests’.

A low traffic neighbourhood (LTN) is a whole residential area, bordered by major roads, that allows vehicles in, but not through. Bollards or planters can be used to filter off streets at strategic points, preventing traffic using the area as a cut-through to the North Circular. Such filters prevent rat running, but allow people to walk and cycle through. Every street can still be accessed by vehicle.

A bus gate is a point on the road with signs and cameras that you can’t drive through without receiving a fine. Buses, bikes and emergency vehicles can all pass through, and cars can still use the road on either side to access the area. Bus gates often operate part-time, eg peak hours only.

Bus gates have been introduced in areas where it would be inappropriate for a high volume of through traffic, such as residential areas.

A bus gate opens up the street for families to cycle to school as well as commuters to work, forming the backbone of a healthy low traffic neighbourhood that prioritises sustainable transport.

TfL would need to reinstate the right turn from Bounds Green Road onto the A406.

Doesn’t Brownlow Road need to be a through route?

Yes – but not primarily for cars. Brownlow Road’s narrow design and overwhelmingly residential status make it completely unsuitable to carry its current levels of up to 10,000 vehicles a day, often clogging up the entire road. At the heart of a low traffic neighbourhood, Brownlow Road will continue to be a through route – but one that prioritises active travel and public transport. We hope to see hundreds of school children walking, cycling and scooting along it every day on the school run to Bowes Primary, Bounds Green School, and other schools in the area – as well as hundreds of commuters cycling instead of taking the car or Piccadilly Line.

People tend to think that traffic is like water – block one route, and it will flood another. But traffic is the result of human choices. When walking and cycling are made more safe and convenient, and driving slightly less convenient for short trips, fewer people choose to get in their cars. This is known as ‘traffic evaporation’ and has been documented in similar situations all over the world.

Walthamstow’s first low traffic neighbourhood saw some increases in traffic on surrounding main roads, but the increase was not severe. One study showed that average bus journeys times were not affected (see Chapter 4 of this report) and a Kings College study of the same area suggests that there has not been a decrease in air quality on main roads following the introduction of LTNs (see pages 8-9 of this report). Main roads are usually better suited to absorb traffic than residential neighbourhoods, with a wider carriageway and buildings set further back from the road.

We would expect to see some traffic build-up in the early weeks of a trial, followed by a steady decline in traffic as drivers adjust back to similar levels as before.

Not all of the traffic from Walthamstow’s low traffic neighbourhood was displaced onto main roads – many car journeys simply disappeared. There are 10,000 fewer car journeys per day across the Walthamstow Village area, including the surrounding main roads – a decrease of 16%.

How will I get to my home by car

Every street will still be accessible by car, emergency services, delivery vehicles and refuse trucks. To stop through-traffic, some residents’ car journeys will be more indirect and may take a few minutes longer. Other journeys may well be easier as there will be no through traffic on our roads. Also, residents in LTN’s often choose to make fewer short journeys by car. For many people, any inconvenience is a price worth paying to have a quieter, safer neighbourhood, and cleaner air.

What can I do to support?

Do you agree? If so, feel free to share far and wide. Make sure you also tell your ward councillors. Let them know you support a Bowes LTN, even if you think the council proposal can be improved. A list of addresses is below.

Also, we need your help! Are you able to leaflet, put posters up, brainstorm ideas with us, take photos, design a poster, draft a letter, do some tactical urbanism, or spread the word about the benefits of low traffic amongst your friends? (Not all at once 🤪).

If you have even half an hour a week to spare, and any of the above tasks sound like your thing, please let us know. E-mail: lowtrafficBG@gmail.com