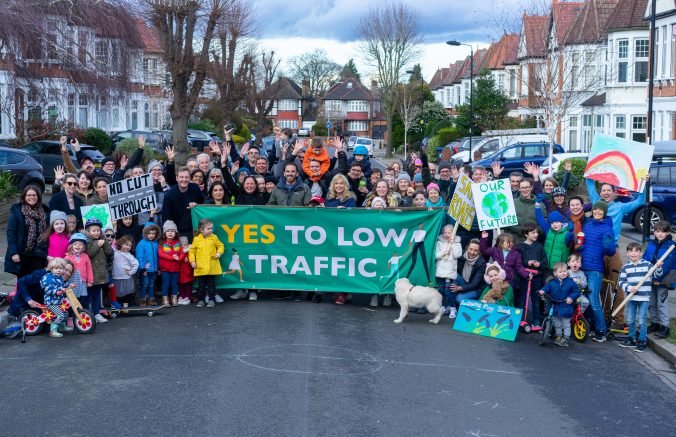 Enfield Council is trialling a low traffic neighbourhood (LTN) in the Fox Lane area. The scheme, which was completed on 5 October 2020 and will be trialled for six months, is expected to dramatically reduce traffic and associated pollution, noise and road danger over a large area of local access roads stretching from Palmers Green to Southgate.

Update: some traffic disruption, but not for long

At the time of writing (6 October 2020) the Fox Lane LTN has been complete for just one day. The surrounding main roads – Aldermans Hill, Bourne Hill, Green Lanes, Canon Hill – are seeing more traffic than usual. This is to be expected for the next few weeks at least, as drivers adjust to the new road layout, and it’s unlikely to last.

Looking at the first LTN in Waltham Forest, initial figures showed traffic levels on strategic roads increasing by between 3% and 11% (with one under-utilised nearby distributor road going up 28%), but the number of vehicles inside the LTN decreased by 56%.  This means that across the overall area, there were around 10,000 fewer vehicles every day, an overall reduction in traffic of 16%. This is called “traffic evaporation”. Since then, traffic levels on the strategic network have started to fall back to previous levels, sometimes lower.

Other factors might also be at work – there has been a rise in car use generally since lockdown, and because buses to school are less reliable, more parents are driving the school run. The Fox Lane LTN is at least making it safer to reach St Monica’s, Walker and Hazelwood Schools without a car or the bus.

What is a low traffic neighbourhood?

A low traffic neighbourhood (LTN) is a residential area, bordered by main roads (the places where buses, lorries, non-local traffic should be), where through motor traffic is discouraged or removed. Strategic road closures (like bollards or planters) prevent through traffic. Every street is still accessible by vehicle.

Low traffic neighbourhoods are not a new concept – they’ve been a standard approach in the Netherlands and in good town planning for decades. Most of London’s post-war estates were built on these principles.

There are many ways to design a low traffic neighbourhood, but the main principle is that every resident can drive onto their street, get deliveries etc., but it’s harder or impossible to drive straight through from one main road to the next.

LTN’s create much quieter residential areas where kids can play out, neighbours chat, and more people walk and cycle – and usually there is an overall motor traffic reduction across the wider area too.

Why does the Fox Lane Area need an LTN?

As many residents will tell you, Fox Lane and its surrounding side streets have unacceptably high levels of traffic. The council found 6,900 vehicles a day on Fox Lane itself; a level you would expect on a classified main road. Speeds of 50mph are common. The road is often littered with debris from collisions. The story is nearly as bad for The Mall, Selborne, Amberley, Meadway, Old Park Road and others. The overwhelming majority is non-resident traffic. For instance, Devonshire Road has 150 households, not all are car owners, yet it carries over 1,000 car journeys per day. See data on the Palmers Green Community website.

As a result, walking in the Fox Lane area is unpleasant, particularly crossing roads, and cycling is unthinkable for anyone but brave adults; far too many children are driven to schools in the area who might walk, cycle or scoot if they didn’t have to contend with so much road danger.

Doesn’t Fox Lane need to be a through route?

Yes – but not for cars. Fox Lane was built as a through route over 100 years ago, long before car travel was the norm. Its windy, narrow design makes it completely unsuitable to carry its current levels of over 6,000 vehicles a day, some travelling at more than 50mph. At the heart of a low traffic neighbourhood, Fox Lane will continue to be a through route – but one that prioritises active travel and public transport. We hope to see hundreds of school children walking, cycling and scooting along it every day on the school run to Hazelwood, St Monica’s, Walker and other schools in the area.

All three emergency services were consulted on the design of the Fox Lane scheme. At their request some of the point closures use ‘camera gates’, rather than barriers, which emergency vehicles can pass straight through. Their sat navs should also be updated to guide them to any address in the area via the new layout.

It is my view that this data does not show an increase in response times and therefore that the road closures in Waltham Forest have not had a significant impact on our services.

What does delay emergency services is congestion caused by rat running on narrow residential streets. LTNs address exactly that problem.

Has the council come up with the best design?

We now have a revised design, after feedback and suggestions from residents were taken on board by the council during a prior consultation. The first plan (see image below) was presented in November and December 2019. Better Streets for Enfield were pleased that this design completely eliminated through traffic, but concerned that with only two entry/exit points, Fox Lane might have too much resident traffic concentrated onto it for people to feel safe to walk or cycle. We think the revised design allows easier entry/exit by resident vehicles. This is more or less the design the council have now adopted.

But now my car journey is much longer – won’t this make pollution worse?

It’s easy to think that pollution will be worse, with many car journeys in, out and across the area being longer. In fact, once the initial traffic jams settle down, car journeys are unlikely to be more than 5 or 10 minutes longer even in the worst case scenario. As part of a longer journey, a few extra minutes are not significant. But a very short distance by car will no longer seem worthwhile – it will often be more convenient to walk or cycle. This is how low traffic neighbourhoods put walking and cycling first, encouraging people not to drive short journeys unless absolutely necessary. It means motor traffic falls overall, and with it, pollution.

In the ten-year period in which Waltham Forest created its LTNs the number of households in the borough exposed to illegal levels of NO2 fell from 60,000 to 6,000.

This is the first question most people ask: won’t all that through traffic be displaced onto other roads and cause gridlock?

People tend to think that traffic is like water – block one route, and it will flood another. But traffic is the result of human choices. When walking and cycling are made more safe and convenient, and driving slightly less convenient for short trips, fewer people choose to get in their cars. Some people will stop making particular trips, combine multiple trips into one, change destination, travel at a less congested time, or switch to public transport, walking or cycling. This is known as ‘traffic evaporation’ and has been documented in similar situations all over the world.

Better junctions
Once traffic settles down, there will be benefits for the surrounding main roads of Aldermans Hill, Green Lanes, Canon Hill and Bourne Hill. With hardly any vehicles turning in and out of side streets, traffic will move more smoothly along these main roads, improving journey times. Also, walking or cycling past side roads will be much safer – for instance the collision risk at the scary Fox Lane / Green Lanes junction will be almost nil.

Closing side roads also makes space for parklets right next to the high street, such as the proposed ‘Devonshire Square’ (an area of greenery and seating where Devonshire Road meets Green Lanes). This makes a more pleasant environment for shoppers.