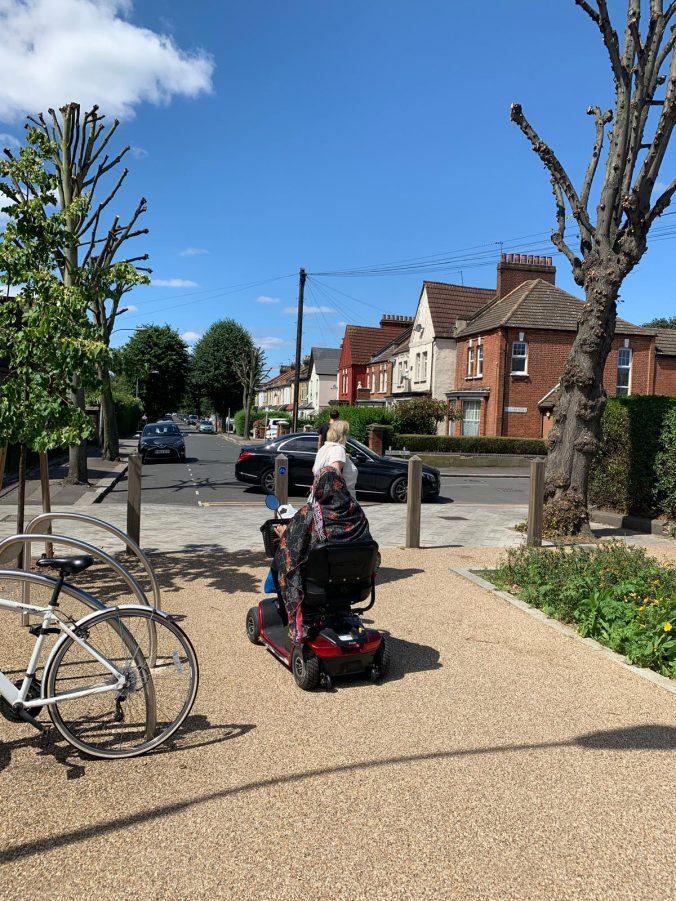 Bollards prevent through motor traffic but allow bikes, pedestrians and mobility scooters through

Following its decision to use a ‘low traffic neighbourhood‘ approach to the Quieter Neighbourhood programme this summer, the council has announced next steps for the Fox Lane, Bowes Park, Firs Lane and Bush Hill Road areas.

This area promises to be Enfield’s first true low traffic neighbourhood, with no through route for motor traffic across the area, creating quiet streets suitable for any age to walk, cycle or socialise. The design has not yet been revealed, but stand by – residents are invited to sign up at letstalk.enfield.gov.uk/foxlaneQN to get alerted very soon.

Leaflets being posted in the area today are advertising a public exhibition of the plans on Tuesday 12 November, on Palmers Green High Street at the former Starbucks site, 3-8pm. The plans will be available online at the same time.

Your support is needed!

The plans could transform lives in the area but will of course be controversial. If you live in or near the area and would like to support it, there’s a group of local residents who would love your help – get in touch at FoxLaneLTN@gmail.com.

One likely concern will be the build up of traffic on main roads as drivers can no longer cut through residential streets. While that sounds logical, in fact reducing road capacity has been shown to lead to reduce traffic overall (after some initial disruption), with little difference to main roads in the medium term. Most importantly, low traffic neighbourhoods have reduced air pollution and led to healthier residents as more people walk and cycle locally. Read all about it on the London Living Streets website.

These neighbourhoods are in ‘Phase 3’ of the council’s Quieter Neighbourhood scheme – gathering perceptions from residents. The surveys can be found at https://letstalk.enfield.gov.uk/neighbourhoods-hub. Please fill them in if you live in one of these areas.

We’re pleased to see Bowes on the list as we have long campaigned for a solution to traffic problems there, especially on the heavily trafficked and polluted Brownlow and Warwick Roads. Brownlow is particularly hard to address as it’s a bus route and considered a main road, yet is overwhelmingly residential and polluted to illegal levels. We will be calling on the council to work with other local authorities to reduce traffic on this blighted street, as well as others in the area.

Firs Lane itself and Halstead Road are among problem rat runs in the Firs Lane area – we have previously supported Halstead Road residents who have had to put up with a lot of traffic, speeding and a series of collisions on their street.

Do you live in this area? If you would like to support a low traffic neighbourhood in the Bush Hill Road area, contact us at info@betterstreets.co.uk so we can put you in touch with like-minded residents.