January 6, 2018 / admin / Comments Off on Navigating the hostile streets of outer London

How can we make Enfield’s streets less hostile to human beings who are not inside vehicles?

As an outer London borough, we are highly dependent on our cars, and the design of our streets – especially at major junctions like on the A10 and A406 – makes travel by any other means unappealing or downright dangerous. Enter Caroline Russell, Green London Assembly member and award-winning healthy streets champion, with some ideas of how to tackle our ‘hostile streets’. Basil Clarke explains – the following is his article on the Palmers Green Community website, republished with permission. 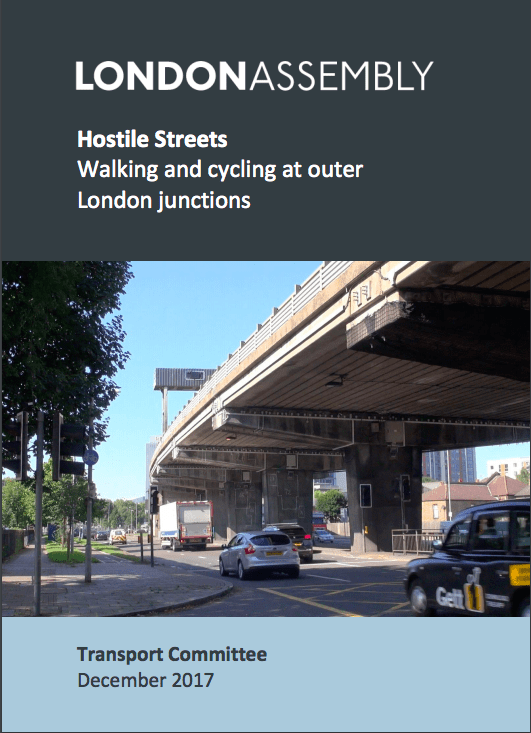 Hostile Streets – Walking and Cycling at Outer London Junctions was published by the Greater London Authority’s Transport Committee at the end of November. Shortly afterwards I went along to a meeting of Islington Living Streets to see a presentation about the report given by Caroline Russell.Caroline Russell is one of two Green Party Assembly Members (AMs) and is a member of the Transport Committee. She was the Rapporteur for this particular study, which was carried out at her initiative. Apart from her the committee comprises three Labour AMs, three Conservative AMs and one AM each from the Liberal Democrats and UKIP.

Caroline began by commending Living Streets (of which she is a member) for teaching her some effective campaigning skills and that you can make progress by persistently chipping away at obstacles. She cited the example of a 20-year campaign to install a zebra crossing in Highbury Barn that had recently succeeded in its objectives.

Introducing herself, Caroline explained that her particular interest in the safety of vulnerable road users had been sparked some years ago by an incident where a 4-year-old in a push chair had been crushed under the wheels of a lorry in Blackstock Road, Finsbury Park. She and other local people with children of the same age had been particularly shocked by this death and it was a factor in her becoming a councillor in Islington, where she currently comprises the entire Opposition – the other 47 councillors are all Labour Party members (convincing evidence that we need proportional representation, since I think we can assume that that a lot fewer than 97.8 per cent of voters in Islington are Labour supporters, despite the presence of Jeremy Corbyn in the borough). 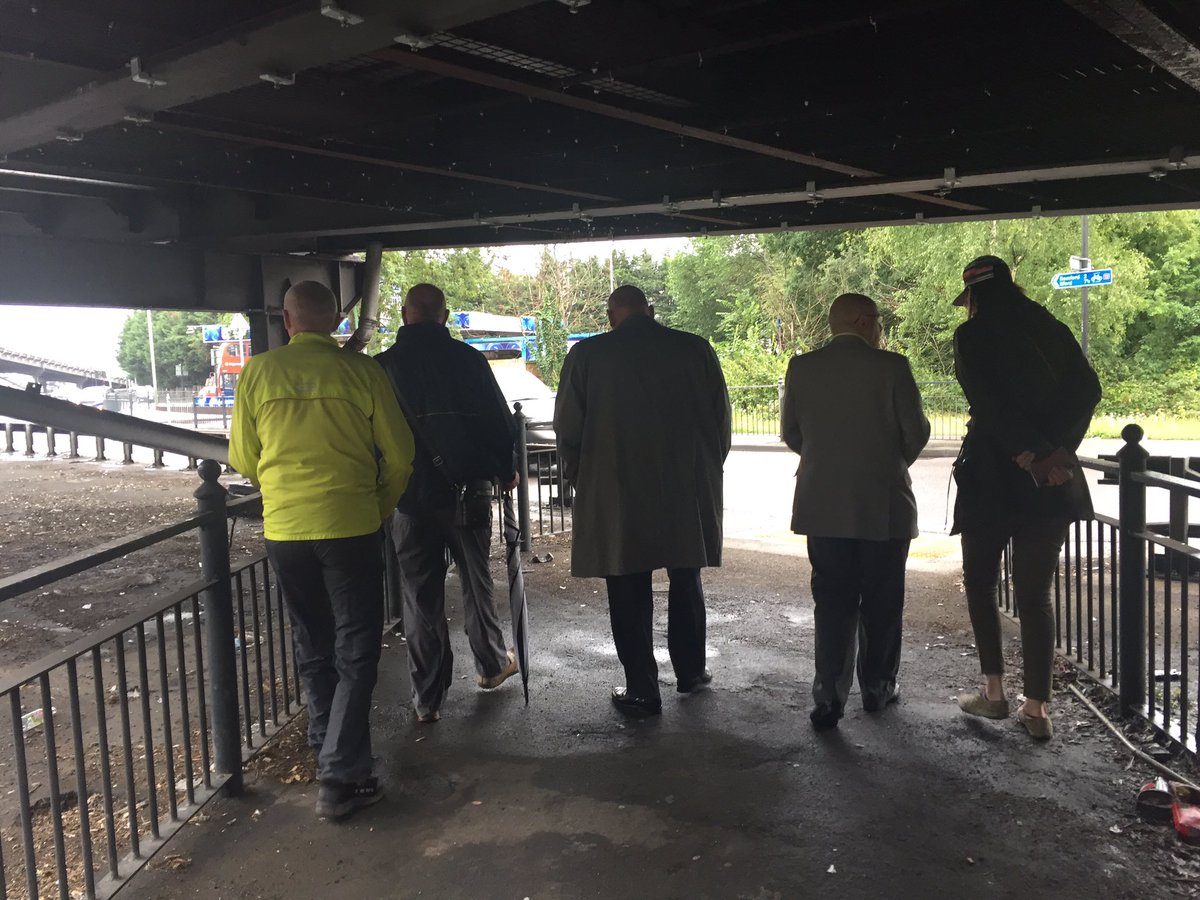 Taking in the scenery at Gallows Corner

A flyover over a flyover?

The report concerns problems for pedestrians and cyclists arising from the design of road junctions in outer London, particularly some of the major junctions. It was prompted by a proposal by the Chair of the Transport Committee that a flyover should be built over an existing flyover at Gallows Corner in Romford, which Caroline found rather alarming. So Gallows Corner was one of four major intersections that she and her research team visited, the others being the roundabout under the Bow Flyover in East London (as well as the flyover, there’s an underpass here), a junction between the M4 (on a viaduct) and A4 (at ground level) in Brentford (once the site of the Brentford Nylons HQ, for those with long memories), and Fiveways in Croydon. 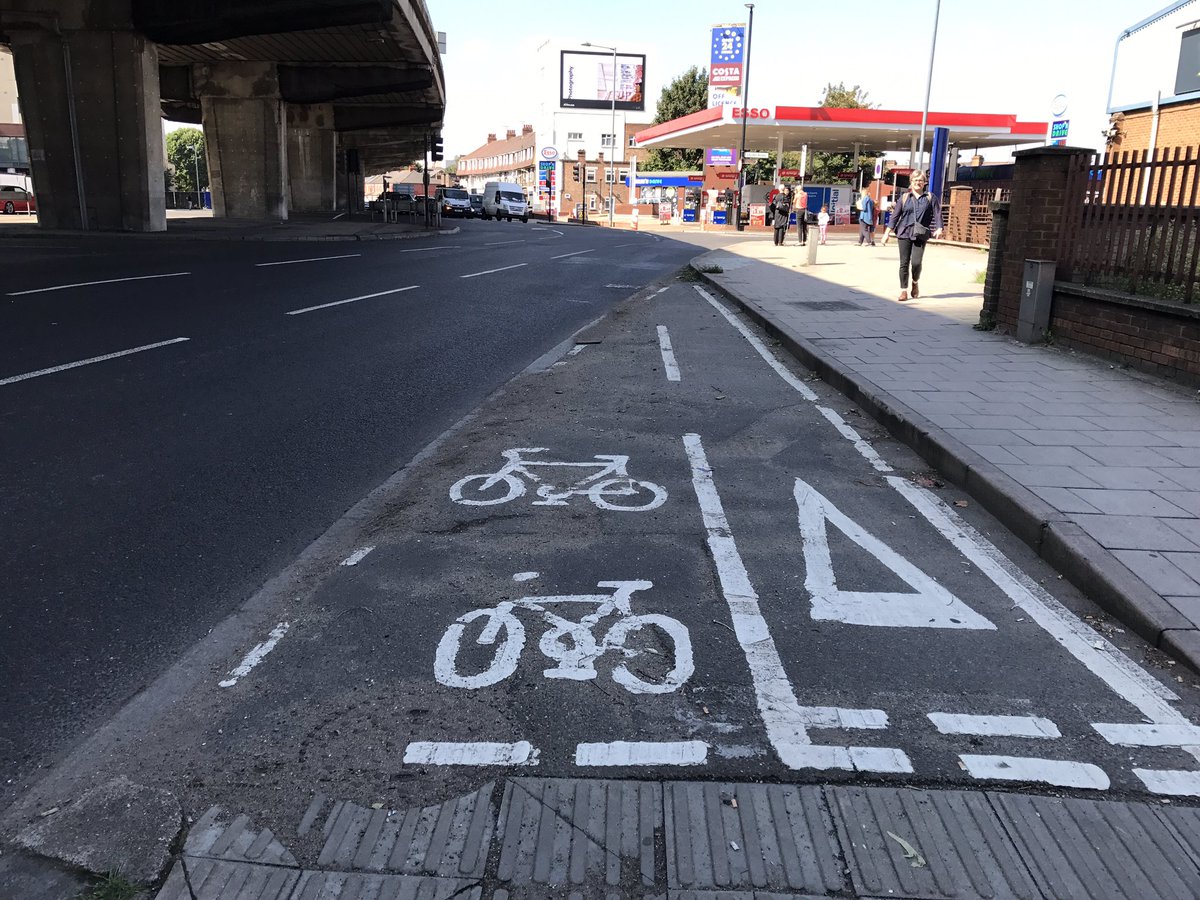 This bike lane in Brentford sends cyclists in the direction of traffic accelerating away from the junction – straight towards them! 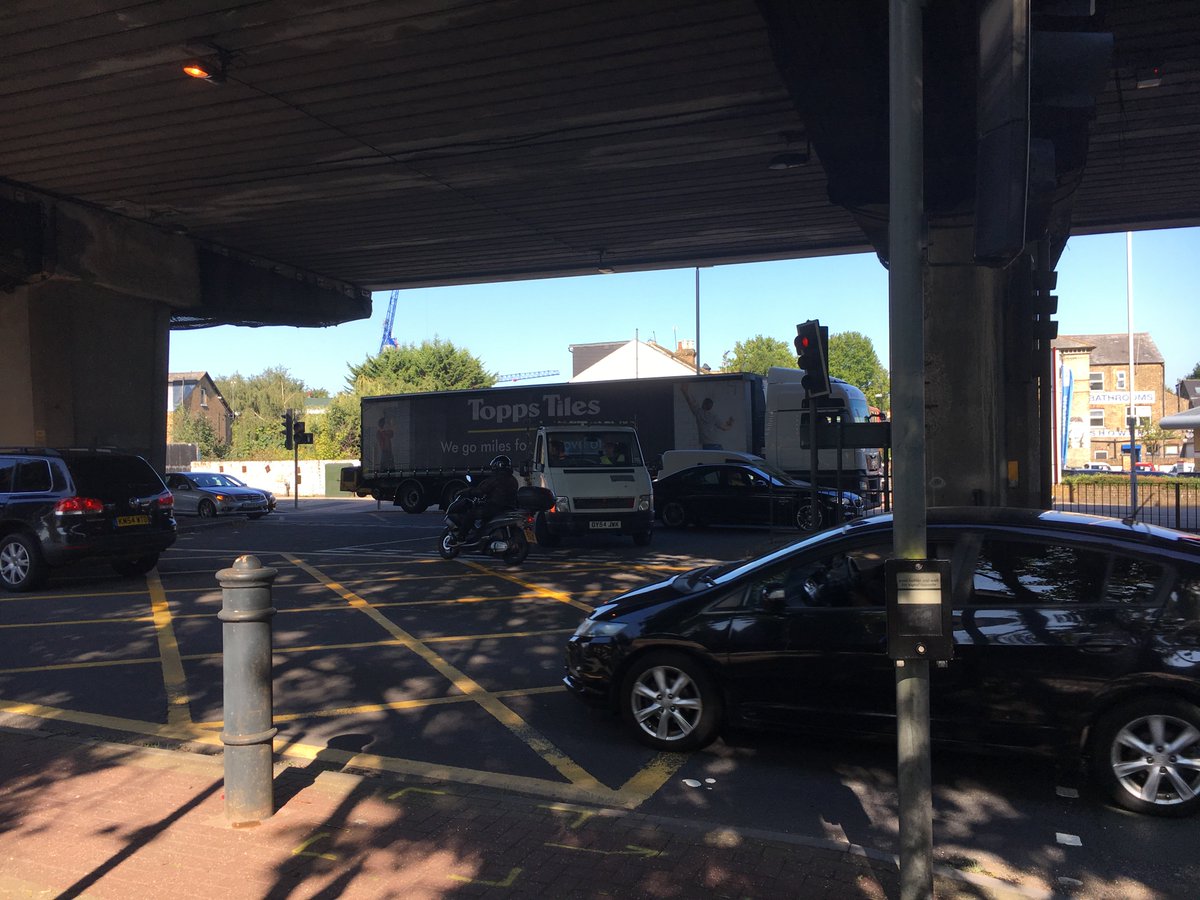 What the visits confirmed was how unpleasant, difficult, inconvenient and often dangerous it is for pedestrians and cyclists to navigate these intersections, even though they are all close to people’s homes and, in the case of Brentford, on the home to school route for children and parents – many of whom choose to drive, even though the walking distance is only short.

On the subject of driving instead of walking a short distance, Caroline said that at the air quality meeting held at Bowes School in January, people had told her that the North Circular created such a severe severance that they got in their cars to go to a shop which should have been two or three minutes walk away

I’m not going to repeat everything that you can read in the report (which isn’t long and is very readable), but I would like to touch on a major theme – the need to change the “culture” of traffic engineers at TfL. Caroline thinks that the undue emphasis on speeding up traffic flow is not just a reflection of many decades of prioritising cars (and of Boris Johnson’s policy of “smoothing” traffic by reducing crossing times for pedestrians), but continues to be incentivised by the key performance indicators (eg “journey time reliability”) that are used to judge their work and calculate their bonuses. To overcome this the report recommends devising new KPIs such as “walking and cycling mode shares”, “car dependency” and “bus journey time reliability”

Indeed, pedestrians have been neglected to such an extent that little or no past data was collected by which to judge improvements. However, where there has been data about walking and cycling and this has prompted some improvements, this has occurred mainly in central London. At the major suburban junctions that the study looks at, what data there has been has suggested that there was little pedestrian or cyclist traffic and hence no great need for changes. In actual fact, the lack of pedestrians and cyclists arises because conditions for them are so bad that they very sensibly avoid these junctions.

Furthermore, some managers at TfL have expressed reservations about increasing walking and cycling because with more people using these modes there might be an increase in deaths and serious injuries, which would have a negative effect on their performance indicators.

As so often, the questions and answers session after the presentation was the most interesting, since I already knew what was in the report.  Caroline was able to provide some insights into the discussions within the committee and what will (or won’t) happen next.

What exactly is the status of the report? Caroline explained that the report consists of recommendations that the Mayor can accept or not. He has three months to respond and let the committee know which recommensations he intends to go ahead with. However, “purdah” ahead of the council elections begins at the end of March, so public consultations about changes arising from the report can’t be expected until after Msy.

When it comes to overcoming resistance within TfL, Caroline sees the Healthy Streets Indicators as being of great potential assistance. TfL will have to test all their future proposals against the criteria which they set out.

TfL, of course, only control a very small proportion of London’s roads. What will they be able to do if borough councils are lukewarm about or downright opposed to the report’s recommendations? Caroline thought that TfL would need to ensure that the Local Implementation Plan (LIP) money that they give to boroughs for road improvements is conditional on meeting Healthy Streets criteria. But what if they’re so anti these measures that they decide to do without LIP money? Well, …

Was the committee unanimous in its recommendations? No, the Conservative AMs refused to agree to the report and wrote a short minority report explaining their objections, in particular to any suggestion of reviewing speed limits. They tried hard, but unsuccessfully, to persuade Labour AMs to join them in opposing speed limit reviews.

The Conservatives were also opposed to researching a “Turning the Corner” scheme at traffic lights, on the grounds that it would cause delays. Caroline explained that the purpose of Turning the Corner was actually to reduce delays for all road users, since it would do away with the need for a separate pedestrian phase. (“Turning the Corner” is the name being given to the system which is very common abroad, including in the USA, whereby during the green phase all traffic, including pedestrians, has the right of way to go straight on, and traffic which is turning has to give way to anyone who is going straight on, including pedestrians and cyclists. My view is that this is a sensible arrangement, but it may be too late to implement it safely in the UK, now that so many drivers wrongly assume that they have priority over pedestrians and cyclists crossing side roads.)

The UKIP AM objected to the same two recommendations, on speed limits and Turning the Corner, and also to Recommendation 6 – “TfL should look beyond collision data and consider the potential to increase walking and cycling when selecting junctions to improve” – arguing that cycle lanes should not be created at junctions with few cyclists.

Caroline said that initially the UKIP AM had been going to object to recommendation 4 calling amongst other things for a check on side roads without dropped kerbs, since they made the distinction between pavement and carriageway less clear. But once it was explained that they made it possible for people in wheelchairs and pushing baby buggies to cross roads, this point was dropped.

Smartphone apps: “No side street is safe”

A bit off-topic, but the question of new technologies came up.  Caroline thought that smartphone apps could be invaluable if used to call public transport.  But she said that “Uber has caused a lot of damage” because it is undercutting the price of public transport and hence undermining its viability, while treating its drivers disgracefully.

Another big problem is Waze, which sends drivers along rat runs even in areas that they are unfamiliar with.  Her verdict: “No side street is safe”.

My conclusions? That Caroline Russell is a very valuable assembly member. That the report’s recommendations make sense. That the probability is that they will be implemented to some extent. That local campaigners for safer roads should be persistent and will make progress in small steps.