November 27, 2018 / admin / Comments Off on Planters arrive in the Fox Lane area

Yesterday the first planters for the Fox Lane area’s Quieter Neighbourhood were put in place, starting with The Mall and Selborne Road N14, as shown in the tweets below.

The first planters to be installed in The Mall N14 as part of the Council’s Quieter Neighbourhood Programme. ⁦@EnfieldCouncil⁩ ⁦@CycleEnfield⁩ ⁦@BetterSt4Enf⁩ pic.twitter.com/514AMCtKel

The Mall is part of the most heavily used rat run through the area, with thousands of cars going through every day – in our traffic counts we found more than one car every ten seconds at peak hours. So it was not a surprise to hear reports of a traffic jam this morning as rush hour traffic encountered the planters for the first time.

Today planters have gone in on the junction of Selbourne Rd and The Mall. These are trial positions that will be monitored and tweaked over the coming days if necessary, before rolling planters out to the other QN roads in the coming weeks! pic.twitter.com/Aot1kOjzVd

It will be interesting to see the effects over the next few days and weeks – will drivers start using a different route to avoid potential jams on The Mall, leaving the street with less traffic…? The council have just carried out a ‘before’ speed and volume survey on this road in order to compare with the ‘after’ in a few months’ time.

Another update is that the final version of the Quieter Neighbourhood map has reinstated the planters at the Aldermans Hill end of the four roads from Lakeside to Devonshire. 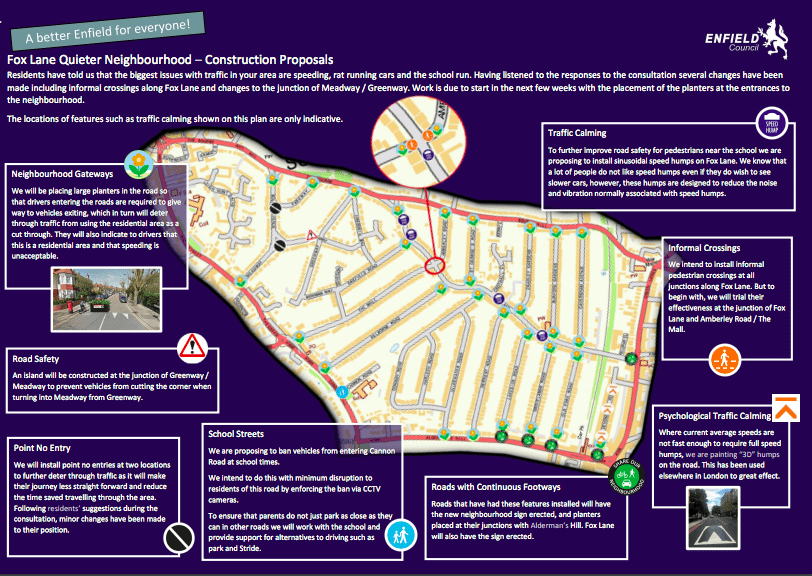 The final version of the map shows the position of all the planters – click for a larger image.