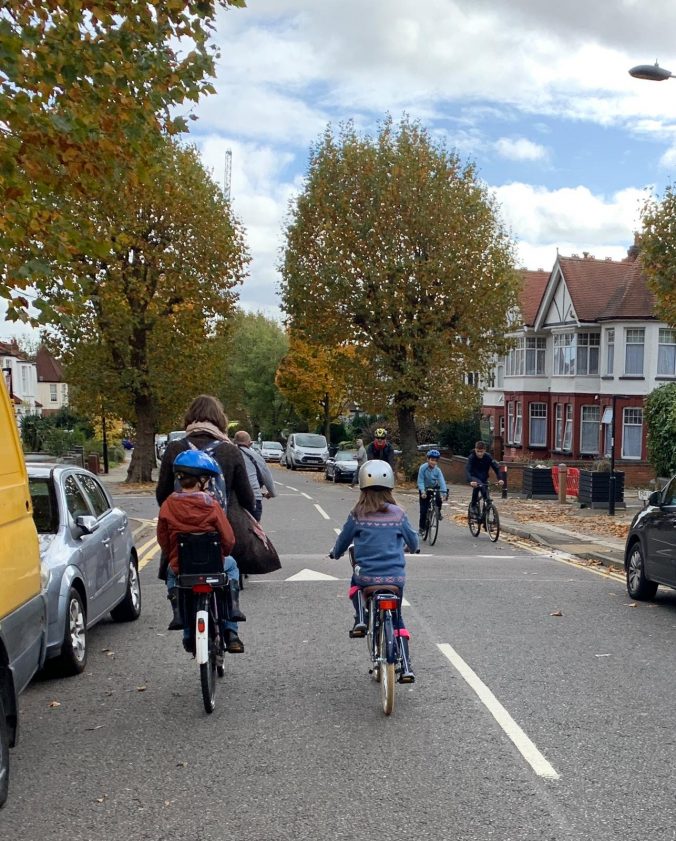 Families cycling on Fox Lane - unthinkable before the LTN

Please support LTNs – they are for everyone’s safety and wellbeing

January 17, 2021 / admin / Comments Off on Please support LTNs – they are for everyone’s safety and wellbeing

A man describing himself as ‘London’s happiest bus driver’ has written to the Islington Tribune to say: ‘Remember, drivers, these traffic scheme changes keep people safe.’

He describes the frustration that many drivers feel, encountering closed roads that used to be handy short cuts. On one car journey past a low traffic neighbourhood (LTN) he says, “I was sitting there doing deep breathing to calm myself down. I could imagine car drivers wanting to take the next left getting frustrated.”

But he supports LTNs, citing the Vison Zero aim of zero deaths on London’s roads.

“It’s a good thing they’ve stopped cars going down some roads. I believe government and councils are doing their very best to keep people safe, and that’s something to say thank-you for”.

Patrick Lawson in a letter to the islington Tribune

Changes to our driving routes and habits can be deeply frustrating. But we need to see the bigger picture – that low traffic neighbourhoods are delivering massive benefits, with safety at the top of the list. So for the sake of your fellow residents’ wellbeing, please take a deep breath and support Enfield’s LTNs!

Here is a round-up of the latest research. Extracts are taken with permission from a London Cycling Campaign blog, ‘LTNs Work‘.

New research into Waltham Forest LTNs compares police injury data (STATS19) inside the LTNs with other areas and with the same streets before implementation in 2015-2016. This suggests that walking, cycling and driving within an LTN all become 3-4 times safer per trip, with no change in road danger on the boundary roads. Read the report: The Impact of Introducing Low Traffic Neighbourhoods on Road Traffic Injuries.

…but high traffic neighbourhoods are dangerous

Department for Transport data showed that traffic on neighbourhood (or minor, ‘unclassified’) roads in London has doubled since 2008. This was the year the 3G iPhone was released, when the use of sat nav apps like Google maps and Waze by drivers began to be popular.

Over the same period, walking and cycling casualties on neighbourhood roads have shot up, as shown by TfL’s latest analysis of STATS19 data. Neighbourhood streets are not designed to carry lots of traffic. They have blind corners, few crossings and more people are out and about. A driver cutting through a side street is much more likely to injure or kill than a driver on a main road.

LTNs are a much-needed safety measure to keep through traffic on the main roads that are designed to handle it, for everyone’s safety.

Conducted by residents but with guidance and methodology from Dr Anna Goodman, this work compared the number of people on bikes with pre-intervention ‘manual’ counts by the Department for Transport.

They found impressive increases in the numbers cycling, especially among children, and the report concluded:

“the large increase in cycling at the Streetspace site demonstrates the substantial potential to increase cycling if infrastructure is provided that allows people to travel safely and comfortably…installing modal filters is a very effective way to make this happen”.

This work further builds in the evidence from a decade of modal filter interventions in Hackney.

A study of London’s ‘Mini Hollands’ used vehicle registration data to examine whether active travel interventions in Waltham Forest between 2015 and 2019 affected motor vehicle ownership, compared to other neighbourhoods.

The chart shows they found statistically significant reductions in car/van ownership in areas introducing low traffic neighbourhoods: 6% less, or 23 cars/vans per 1000 adults, after two years.  They also found statistically significant but smaller reductions in areas introducing other infrastructure such as cycle tracks: 2% less, or 7 cars/vans per 1000 adults, after 2 years.

One of the authors said:

“This is such an impressive effect. In our evaluation studies we quite often see increases in active travel, less often a mode shift away from cars. An effect of this size is unprecedented in my own sustainable transport research. It is also striking that, although LTNs show the largest effect, non-trivial reductions in car/van ownership are seen in areas that got other active travel infrastructure like cycle tracks”

Dr Anna Goodman, lead author of ‘The Impact of Low Traffic Neighbourhoods and Other Active Travel Interventions on Vehicle Ownership’

There have been claims that LTNs only benefit the well-off, pushing traffic from affluent neighbourhoods onto the main roads where lower-income residents are more likely to live. This study therefore looked at equity in the rollout of LTNs. Notably it found that:

LTNs for all? Mapping the extent of London’s new Low Traffic Neighbourhoods

However, they also call for interventions to improve main roads for the sake of the 5-10% of the population who live on them.

Another study of Waltham Forest focuses on emergency vehicle response times. There’s a natural focus on Waltham Forest among these studies – simply because there is nowhere else that’s got such a wide area covered by interventions that have had time to bed in, so that study can take place over a meaningful period.

That last point is interesting – emergency service vehicles are held up by traffic congestion, and poorly parked vehicles, all the time. The problem is always too many motor vehicles but now every momentary hold up is blamed on low traffic neighbourhoods, frequently when there have not even been any local changes to the road network.