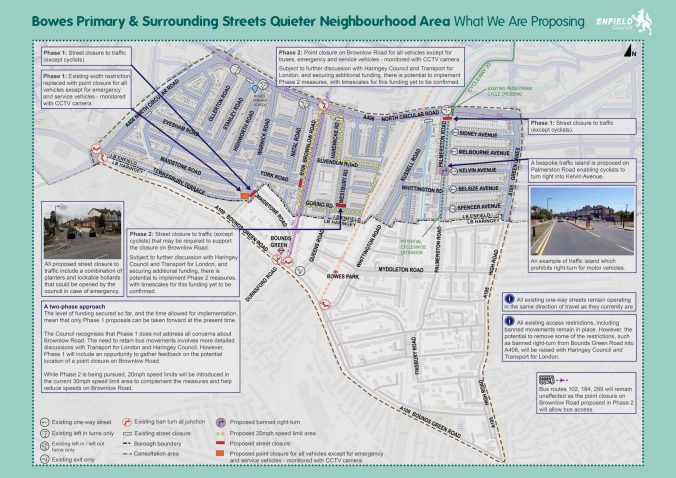 Better Streets for Enfield has been campaigning for a low traffic neighbourhood in Bowes for the last three years to address the intolerable levels of traffic and pollution on roads like Warwick and Brownlow – so we’re delighted to see these proposals. We were especially pleased to see a bus gate for Brownlow included in the council plans. Despite being classed as a ‘B-road’, Brownlow is narrow and overwhelmingly residential, yet endures around 10,000 vehicles a day. We’ve been asking for a bus gate* to make it a corridor for public transport and active travel that will keep the air clean for everyone.

However, Monday’s announcement came as a bombshell to a lot of residents – hence the explosion of new members and comments on our Facebook group over the last few days. Many people were delighted; some were totally opposed; and plenty supported it in principle, but were upset and confused about how it was being done.

Why should I support it?

Most comments have been about the lack of consultation, the design of the plans, and the absence of measures for the roads east of Brownlow Road. These valid points are covered in more detail below. But here’s why we are supporting the plan and why we are asking you to support it too: however imperfect it may look, it will remove through traffic; and this Department for Transport funding may be the only chance we’ll get for healthy streets in Bowes for a very long time. If residents persuade councillors to reject it, there is no other money in the pot. It’s this scheme or nothing. So if you support it, please write to Enfield and Haringey Councils to let them know –  plenty of opponents have already written. Email addresses are at the end of this post.

Here are the main themes of discussion in our group:

Why weren’t we consulted?

Residents feel that this has come out of the blue and it will be implemented within weeks without any chance to comment on the design. This rushed implementation is because the funds to create the LTN are from the DfT’s Emergency Active Travel Fund.

Securing the fund was a huge task as Enfield had to agree the plan with the emergency services and negotiate the filter locations with Haringey within a very tight deadline. We’re very grateful for this, and note that in the past, Enfield councillors have not been to address the complex issue of Bowes traffic head on – whereas this plan does exactly that. The bid was successful and the plan approved by the DfT, but now local authorities must get the schemes done in a matter of weeks or they won’t get the funding, and nor will they get the second, bigger tranche of funds (which in Bowes’ case will be for the bus gate). So normal consultation rules do not apply. But there will be a consultation – once the temporary measures are in. We need to make the most of that opportunity to push for any improvements to the design.

Why are the filters where they are?

There has been lots of concern about the filters (closures) running along the south of the area. Not everyone wants to drive in and out of the area via the North Circular and some car journeys will become longer as a result, not least because of the right-turn ban from Bounds Green Road onto the A406.

“We can’t shape the scheme if there is no scheme to shape.”

The council’s design will transform these streets for the better, by removing through traffic (so long as Brownlow gets its bus gate). Does that mean it’s the best possible design? Not necessarily, and the point of an emergency traffic order using temporary barriers is that you can move them around and find out what works best while the scheme is live. But we can’t shape the scheme if there is no scheme to shape.

One idea that could be considered when it’s in place is to move the filters more towards the centre of the traffic cell, so that residents needing to drive can exit via the side nearest to where they live. With filters halfway down some roads, it should be possible to park on the side you need to exit by. We will also be lobbying TfL to remove the right-turn ban from Bounds Green Road onto the A406. But let’s let the scheme bed in first. At the end of the day, an LTN does make some journeys longer by car, and that inconvenience is a small price to pay for the many benefits that reduced traffic brings to a community.

What about east of Brownlow?

Lots of people are asking why their streets in the east don’t seem to get any treatment. All the proposed measures are in Enfield (see the boundary in the map at the top), and south of the Haringey border there is nothing to stop drivers taking a short cut through streets like Truro, Nightingale and Whittington.

Through traffic doesn’t respect borough boundaries, and there’s a risk that it will worsen on these southeast roads. The whole ‘cell’ should be a low traffic neighbourhood – that is, the area bordered by the A406, Green Lanes and Bounds Green Road. But the DfT won’t wait, so the scheme should go in as planned. Once it’s bedded in, we will be calling on Haringey to work with Enfield to complete the whole cell (see the suggested positions in our map above). We’re confident that Haringey Living Streets and Haringey Cycling Campaign will support the idea.

Plenty of people have written to both councils to oppose it. If you don’t want to lose it, please support it, even if it’s not your preferred design. You can email the cabinet members and MPs of both boroughs, copying in your own ward councillors, using the addresses below.

*A bus gate is a point on the road with signs and cameras that you can’t drive through without receiving a fine. Buses, bikes and emergency vehicles can all pass through, and cars can still use the road on either side to access the area. Bus gates often operate part-time, eg peak hours only.