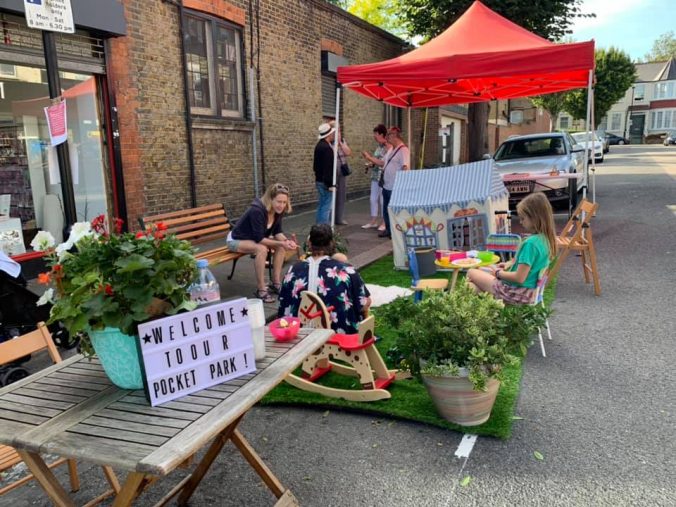 For a few hours on a sunny Sunday afternoon, Better Streets for Enfield transformed a couple of drab parking spaces next to Palmers Green High Street into a colourful ‘parklet’ for people to enjoy. Here’s how it was reported on the Enfield Council website…

“On Sunday 15 September we supported a pop up parklet and play street on Devonshire Road. The project was initiated by Better Streets for Enfield, a local community group. Enfield Council fully supported their proposal to re-use two parking spaces to demonstrate to Green Lanes businesses and nearby residents the benefits of a Low Traffic Neighbourhood in the area – specifically that a filtered side street could provide a public space that could be enjoyed, and additional seating and planting right on the high street. The parklet and play streets were delivered by temporarily closing the street and suspending parking for half a day. It was a great day that saw people of all ages enjoying being outdoors without the worry of motor traffic. Enfield Council has aspirations to develop more parklet trials on high streets and local town centres.

Parklets are public seating platforms that convert kerbside parking spaces into vibrant community spaces. Parklets are the product of a partnership between the Council, local businesses, residents and neighbourhood associations. Most parklets have a distinctive design that incorporates seating, greenery, and/or bike racks, and accommodate unmet demand for public space in thriving neighbourhood retail streets or commercial areas.

Play streets are fantastic way of meeting your neighbours, making friends for children and parents whilst having fun in your street drawing with chalks or scooting skipping and riding your bikes! Residents apply to close off their streets to through traffic for a few hours monthly, so that children can play safely and neighbours come together, connecting people and communities.

We provide support to residents, schools and other community organisations that want to take part. We will advise on implementation, help written material to promote the scheme and provide stewarding equipment.

As a result several local businesses have made contact with Better Streets for Enfield to express their interest in having a parklet trial on the high street outside their business, which we will explore further.”

Many thanks to Adrian Day for organising the event, Maggie Westhead and family for their kids’ area, the residents of Devonshire Road who ran the play street and lent plants and seating for the day – and the many others who helped.