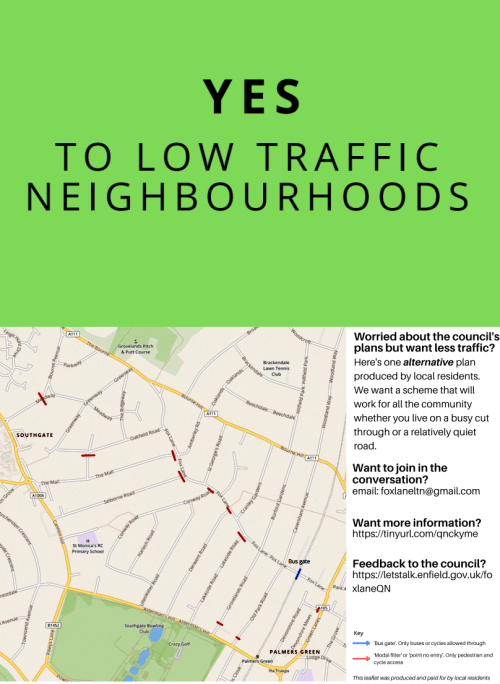 Joining together as the Fox Lane low traffic neighbourhood (LTN) group, residents from 13 streets in the area say they are pleased that active steps are being taken to cut down on speeding vehicles and rat runners so that everyone can more readily walk and cycle around the neighbourhood.

Commenting on the plans, Adrian Day, spokesperson for the Fox Lane LTN group says: “For too long drivers have been using these residential roads as a cut through with recorded speeds regularly over 60mph. Tens of thousands of vehicles use these back streets as a shortcut every day. This traffic should be kept on the main roads where it belongs, so that people feel safe on the roads they live and are happy to walk and cycle. We’re delighted that the Council is bringing forward plans to tackle this issue properly.

Cranley Gardens resident Sarah says her daughters tried to cycle to school along the Mall (which gets over 4,000 vehicles a day) after they had completed their primary school Bikeability training. “An SUV driver nearly knocked one of my girls off her bike. They never did it again. Taking the through traffic off Fox Lane and the Mall would open up these roads for families to enjoy walking and cycling the school run.”

Campaigning for more than 30 years

The issue of heavy and speeding traffic is not new. Some residents have been campaigning about traffic problems in the area for more than thirty years. The Fox Lane “Quieter Neighbourhood” was first consulted on four years ago, and many residents have been calling for a low traffic neighbourhood ever since. The planters trial earlier in 2019 – narrowing the entrance to each road with a large planter – failed to reduce traffic or speed.

Meadway resident Ben has two children aged 5 and 2. He says, “Meadway is a residential road that bears the same volume and speed of traffic as most main roads. A low traffic neighbourhood would have an enormously positive impact on our family life; at the moment it feels dangerous to cross the road or walk around the neighbourhood with children on scooters. The thought of cycling around the Fox Lane area as a family is inconceivable. A small change in driving habit and route would make our roads friendlier, healthier and safer for generations to come.”

Complaints backed up by council data

The group’s complaints about heavy traffic are supported by automatic traffic count data collected by Enfield Council in late 2018 and published in summary form by Palmers Green Community earlier this year. The worst roads included Meadway – where more than 29,000 vehicles were detected over the week the monitoring was carried out; the Mall – nearly 24,000 vehicles over the week; and Fox Lane itself, with 42,000 recorded vehicles.

As an example of the problem the group points out that people living in Amberley Road, a short residential street with just 50 households, had to put up with more than 4,300 cars on the busiest day and around 27,000 over the week. It is clear, they say, that the majority of these journeys are through traffic rather than resident car journeys.

Grovelands Road resident and father of two Paul says: “Fox Lane is part of the route to my childrens’ primary school. Walking there is not a pleasant experience with cars speeding and being worried about crossing roads. I’d like the option of cycling up Fox Lane but at the moment that’s not possible. I’d like a quieter neighbourhood to stop the rat running and the speeding boy racers..”

Agreeing with the principle, but not every detail of the plans

The Fox Lane LTN group do not agree with every detail of the Council’s plans and many members would like fewer closures than proposed. However, all are in agreement of the principle of an area-wide plan to close rat runs and hope sticking points will be ironed out during the trial. The group is encouraging all residents to share their views with the Council about what they think will work.

Adrian Day continues: “Enfield Council has declared a climate emergency. Reducing the volume of traffic in the area will improve air quality and help more people consider walking and cycling and rely less on their cars for short journeys. This will in turn improve residents’ health. The same approach in Waltham Forest produced dramatic improvements in air quality and daily exercise among residents – and showed that the surrounding road network can cope with changes to vehicle journeys. Hackney has had similar schemes for decades and low traffic neighbourhoods are now being proposed by several boroughs across London. As Enfield looks to roll out low traffic neighbourhoods across the borough it is great that we are able to play our role in finding out what works best.”

To support the Fox Lane area residents or find out more, contact them on FoxLaneLTNConversation@gmail.com.