Over the last week Enfield has seen a spate of social media posts ridiculing cyclists and inciting violence against them.

Photos of cyclists riding outside the new cycle lanes, which is permitted by the Highway Code, have been shared hundreds of times and been accompanied by comments like “Hit him with the car” and “knock the *****s over”. 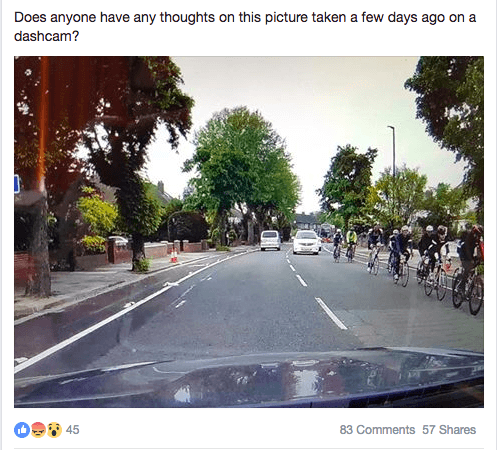 The post above was by a well-known  member of the business community in Palmers Green. It provoked a torrent of hatred and several calls to drive into cyclists, including: “…if any bike ****s get in the way squash them.” Better Streets members asked this person to address and denounce any violent comments. (Update: the offending comments were deleted three days after the post went up. The post itself has not been deleted however, and has now been shared 81 times).

An earlier post by Conservative Cllr Andy Milne had the same message, and some violent responses among the comments, like “Hit him with the car he is in the wrong”.  So far Cllr Milne has refused to condemn or denounce this incitement to violence, despite pleas from local parents who cycle with their children (Update: in response to a comment from Better Streets, including a link to this post, Cllr Milne denounced any violence or incitement to violence in the comments, and took his post down – three days after he posted it.) 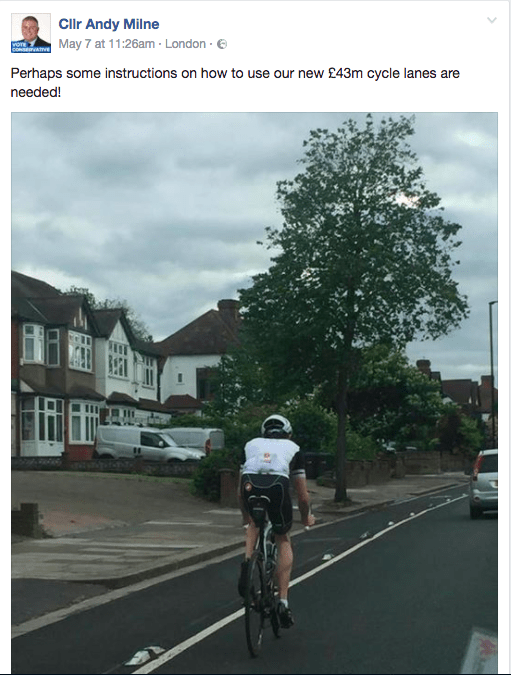 As Better Streets for Enfield we have written to the council urging a public response to the situation and reported the most violent comments to the police.

Meanwhile, this is what we would like people to know:

Online hatred against cyclists online has real effects on the road

This morning a mother who cycles her children to nursery posted on Facebook:

“Just had someone shout at me from a car accusing me of terrible riding as I came up (a very busy) Powys Lane on the bike. I don’t know if it was terrible, I certainly didn’t think I was doing anything wrong, but I no longer feel able to cycle on roads on my own. I actually feel close to tears.”

Other residents who cycle have reported similar incidents – a mother wheeling her bike on the pavement with her child was told by a passerby “Get off the pavement – your bike lanes are ruining Enfield!” A man cycling home from work was deliberately rammed from behind when he stopped at traffic lights, buckling his back wheel. There is anecdotal evidence that abusive events like these tend to spike straight after negative social media about cycling, an observation made around the world, also made in Peter Walker’s recent book Bike Nation.

I no longer feel able to cycle on the roads on my own. I feel close to tears

It wouldn’t be acceptable to post abuse about someone’s age or ethnicity or disability – why is it okay to abuse someone who uses a particular type of transport? Citizens of Enfield – especially prominent business leaders and councillors  – need to take responsibility for what they post online including what’s said in the comments. Remember that your innocent jibe on Facebook might lead to a mum giving up cycling, or worse, a death like 30-year-old Anita Szucs’ earlier this year.

Cyclists are not obliged to use cycle lanes

There is nothing in the Highway Code to make cycle lane use compulsory for cyclists. And plenty of reasons why people choose not to use them:

We need to get used to this sight, because fast, fit cyclists are unlikely to ever use the lanes.

It’s not acceptable to abuse people for their age/ethnicity/disability. So why is abusing cyclists okay?

The lanes are not for cyclists – they are for everyone else

The whole point of Cycle Enfield’s bike lanes is to get people on bikes who don’t currently cycle. You will never see a young child, a teenager, a parent with a child on their bike, an elderly or disabled person riding on the A105 at the moment. But there’s every chance that these more vulnerable road users will take to the road when the lanes are complete and they can ride separately from motor traffic. A teenager might cycle to school, or a parent to nursery or school, helping reduce traffic and pollution on the roads and getting fit in the process.

Those who already cycle – the strong and fearless 1% who will cycle regardless of road conditions – don’t need bike lanes. The bike lanes are for everyone else.