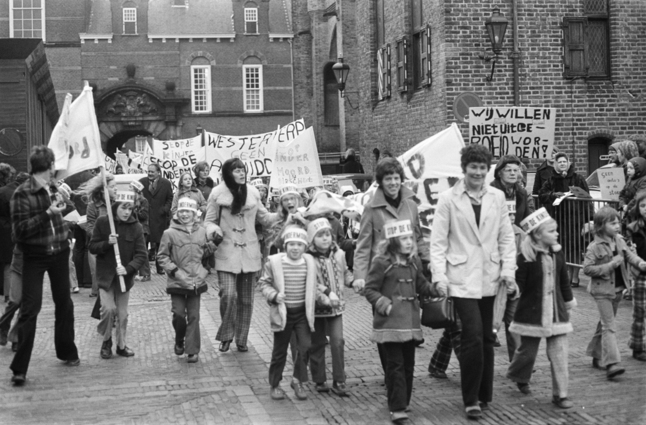 Stop De Kindermoord (Stop the Child Killing) protests were happening in cities throughout the Netherlands in the 1970's.

Hal Haines with a foreword by Viola Rondeboom

Last Monday we returned from a long summer escape in Utrecht to find our peaceful North London neighbourhood suddenly up in arms. Groups of upset neighbours had taken to the streets to protest, and this went on for a few days in a row. What caused the mayhem? The Bowes and Bounds Green area is one of a few neighbourhoods in Enfield about to get a Dutch style, area-wide low-traffic scheme intended to remove through-traffic from residential streets and redirect it back to the main roads.

It will be a ‘live trial’, meaning measures will be tested first so residents can experience them in real life, and then say if they love or hate it, and want to keep, change or reverse the layout.

In countries like the Netherlands, Denmark, Belgium and Germany, schemes like these are nothing new. However, in UK transport planning the car has remained king for decades, and despite the fact that the trial area in question is about twice as densely populated as Amsterdam, private motorised traffic had been allowed to grow unrestrictedly. People say that because there will be less space for cars, they expect it will turn the area into gridlock and children will be in danger from even higher levels of pollution. Since my kid attends a school on the North Circular Road, I fully understand their worries. However, I think this trial is exactly what is needed to start finding a solution to the problems surrounding through-traffic, car-dominance and pollution.

Where I come from, not doing a scheme like this would now be viewed as insane. We also wouldn’t tolerate uncontrolled volumes of traffic through the middle of housing. However, 50 years ago they had the same problem and the first changes weren’t warmly greeted by everyone either.

It has been a pretty difficult week as the introduction of Enfield’s first low traffic neighbourhood was met by angry protests. It reminded me of a very interesting film from 1972 also showing some angry protests – this time from the Netherlands. People often say that the Dutch are different and that people have always cycled and are used to cars taking second place to pedestrians and people on bikes. However, have a look at how familiar the streets look. OK, the cars are old fashioned but the street design is the same, with similar driver behaviour and cars parked wherever they can find space. This was at the very beginning of the Stop de Kindermoord (Stop the Child Killing) movement that has shaped road design in the Netherlands ever since. Local residents took to the streets to block and stop through-traffic to help prevent vehicles killing children.

There were 450 child deaths in the Netherlands that year. The UK had plenty of child deaths (1598 in 1971: source BMJ ) too but took a very different approach, instead protecting cars and trying to separate the pedestrian – taking on the ideas of Colin Buchanan. It didn’t quite have the result intended as, for example, street furniture like pedestrian guard rails, only made the roads feel safer for drivers, rather than actually make the roads safer for pedestrians. The humble bicycle rider was left to fend for themselves with a subsequent nose dive in cycling numbers and children retreated from our streets. Perhaps we have just deferred the deaths; children today are less active and less likely to be active in adulthood. Lack of exercise is linked to earlier deaths. Air pollution is said to kill 40,000 throughout the UK. Interestingly, people in the Netherlands tend to be happier (ranked 5th happiest in the world while we trail behind at 15) – is this linked to less car domination of their streets?

So the UK, London and Enfield are at a crossroads – what path do we want to take? The Netherlands’ path where neighbourhoods are automatically no-through routes (with 30 km/h speed limits), or carry on as we are where cars find their way into every nook and cranny? Ideally we shouldn’t have to start from here but the Netherlands started from here too and it worked out pretty well for them.