It’s been exciting to see the new cycle infrastructure take shape on the A105. These photos were taken in the first week of April to give you a little taste of the progress so far (excuse the poor quality of these night time pictures)… 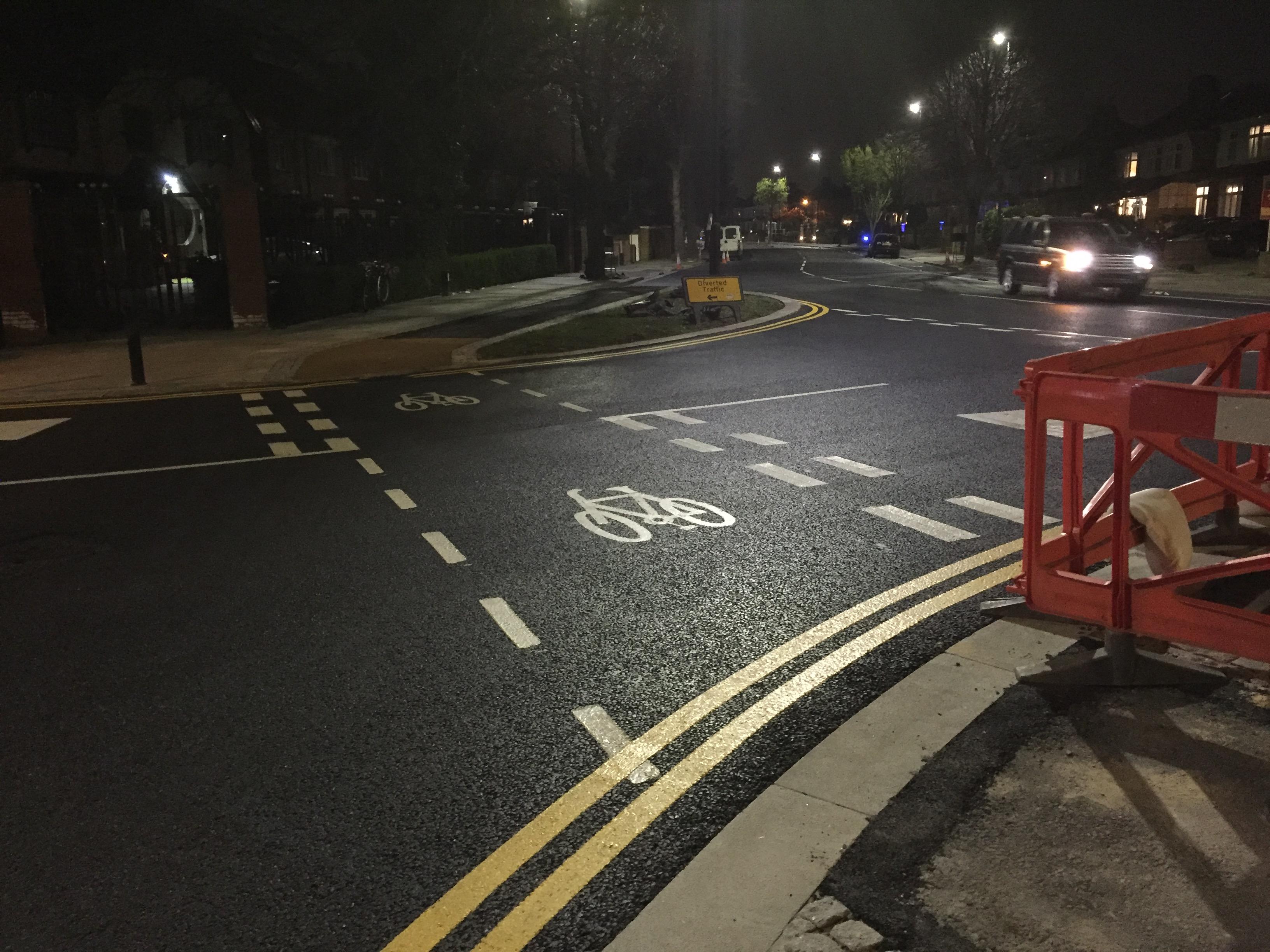 Cycle lane crossing the junction with Park Avenue. The cycle lane in the foreground is the end of a bus stop bypass

Note the two sets of give way lines for cars – before and after the cycle lane. This has triggered some discussion about safety: will drivers respect the cycle lane and look out for people cycling along the bus bypass as they approach the A105? Some of us felt that there is an element of drivers needing to get used to the new layout. Enfield Cycling Campaign have called for a tighter radius on this junction (not such a sweeping turn) to slow drivers coming from Park Avenue, a different coloured material (such as yellow) for the cycle lane as it crosses the junction, and signs to warn drivers. It’s also hoped that the Quieter Neighbourhoods programme will tame traffic on Park Avenue itself, which will improve safety at this junction. 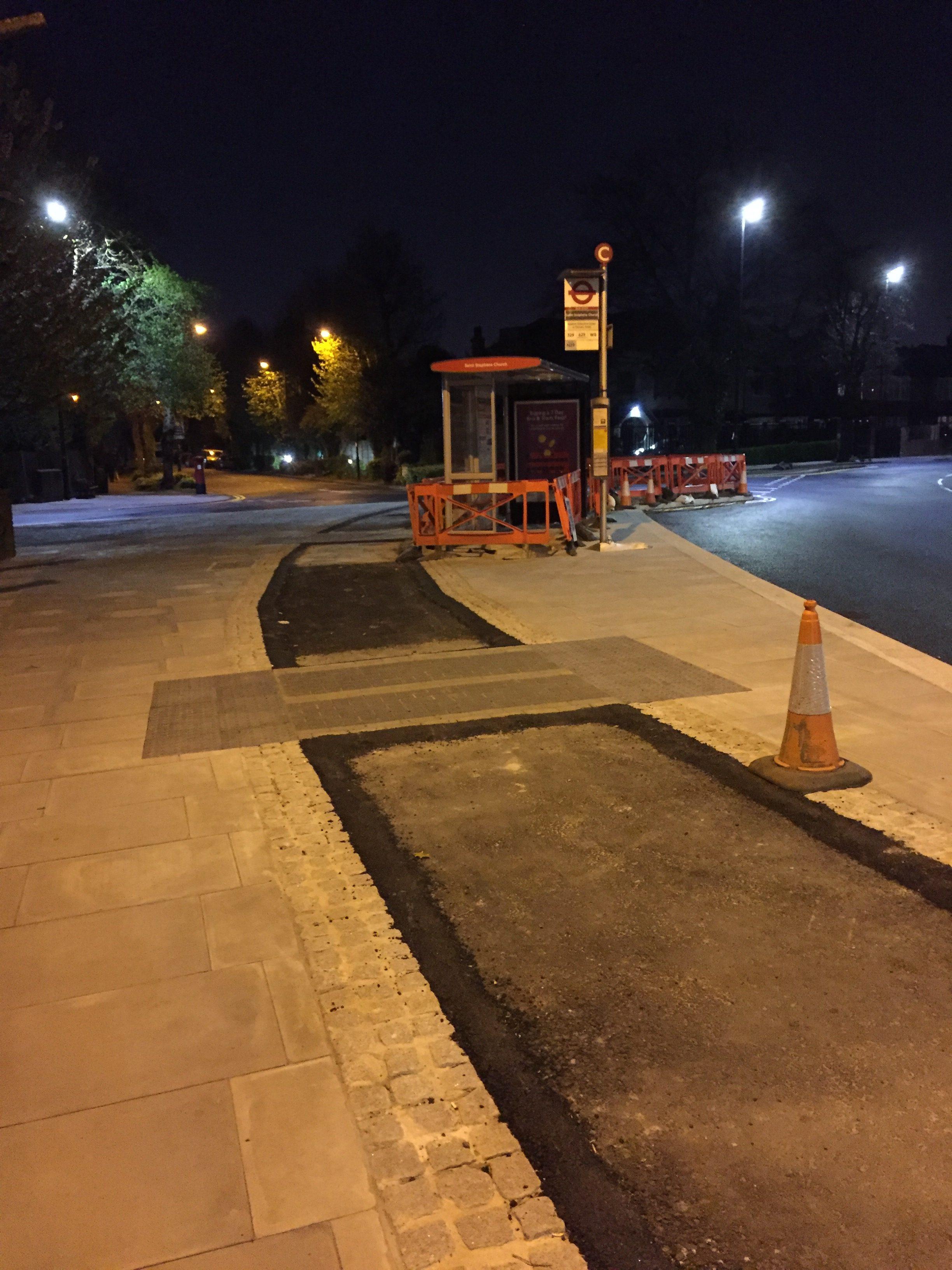 This ‘bypass’ will take cycles past the bus stop on a segregated track (yet to get its yellow surface in this photo). Note the crossings in place for pedestrians.

This is the first bypass to be constructed – most bus stops on the A105 will have ‘boarders’, in which the cycle lane runs between the bus stop and the carriageway, rising up to pavement level to signal priority for bus passengers over cyclists. It’s great to see this nearly finished. A real frustration with sub-standard cycle infrastructure is that simply gives up at bus stops (or the painted lane runs into the side of the bus shelter!). This is a much better solution, and works well in other European countries. 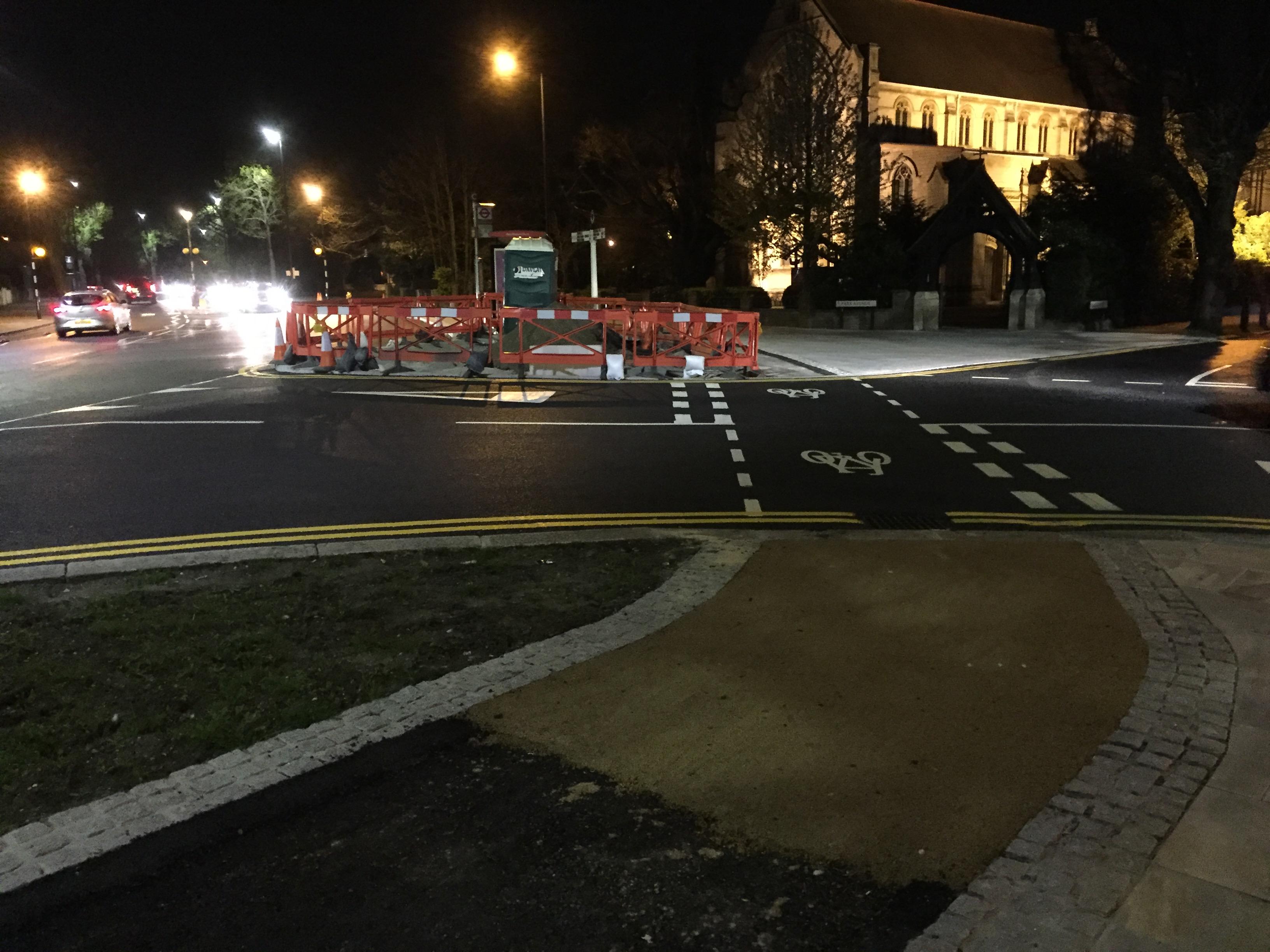 Looking back at the bus stop bypass and Park Avenue junction

The surface of the bike lane is still being worked on here – the paving is complete and looks good quality. 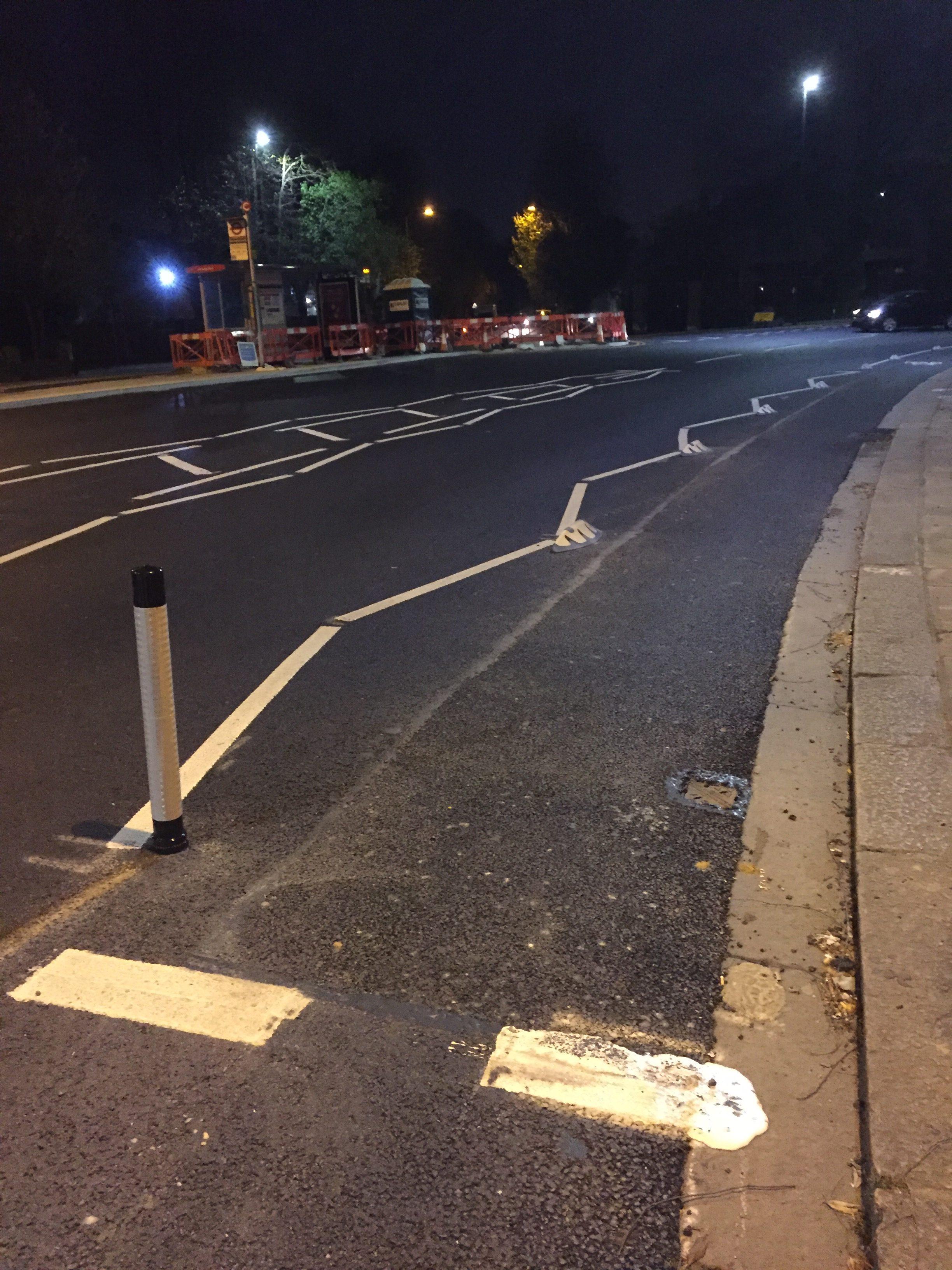 A completed stretch near a zebra crossing – note wand and orcas

Also near Park Avenue, this stretch is complete. It was taken from the zebra crossing (hence the zigzag lines) but you can see the cycle lane logo in the distance and the orcas (lumps of plastic) along the line of the cycle lane. The ‘wand’ (upright post) in the foreground gives a bit of protection to those cycling near crossings and junctions.  We have started calling them ‘wobbly wands’ since they can bent sideways and spring back again (fun for my daughter, who likes grabbing them from the back seat of our tandem). 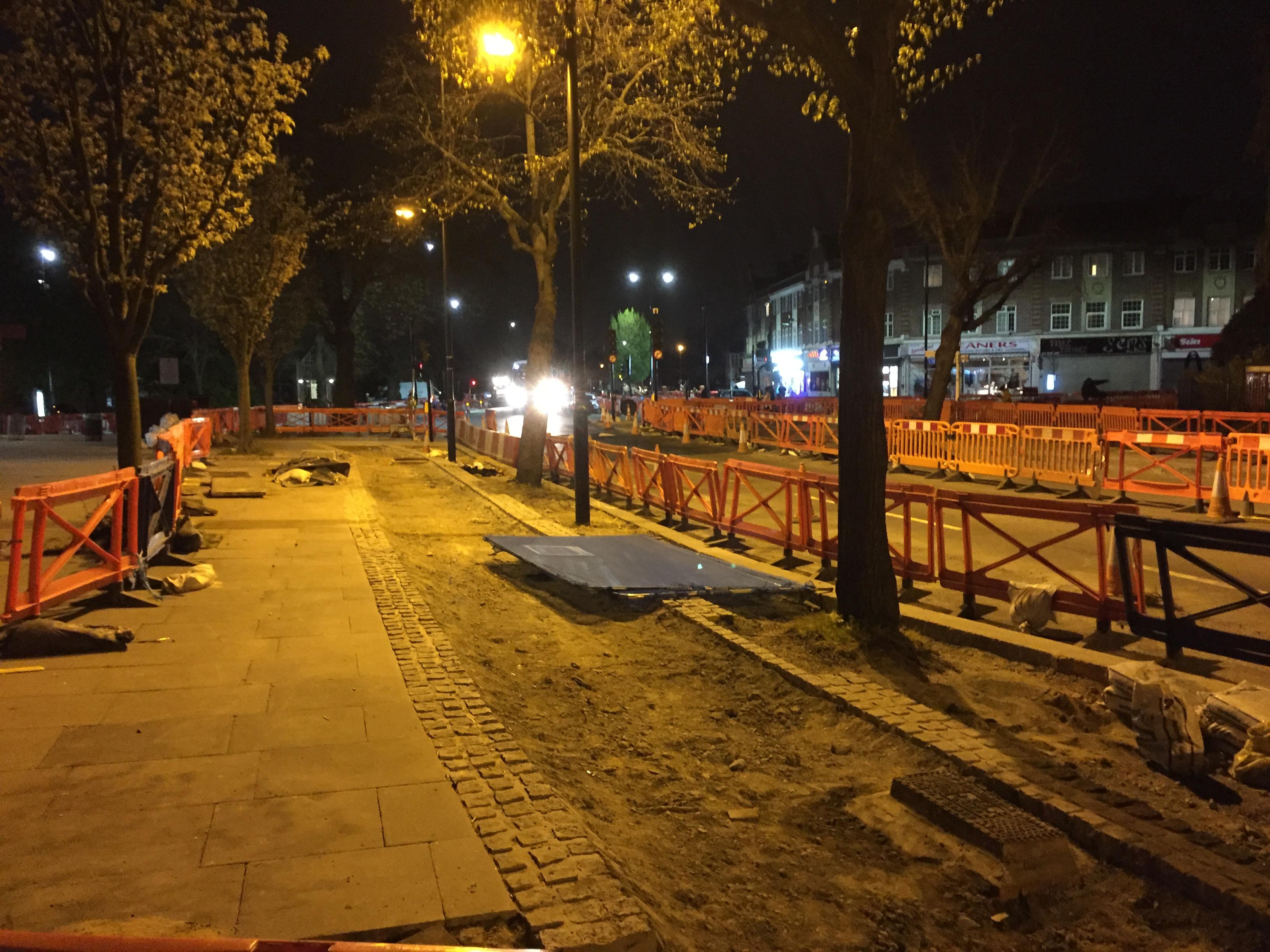 Church Street junction was closed to traffic every evening for a week from Monday 3 April to lay the tarmac. The bright lights in the distance belong to one of the machines working on this stretch. In the foreground you can see what will be a fully-segregated cycle track.

This 4-way junction will use toucan crossings to create a signal phase that for cyclists and pedestrians only across the whole junction – run-of-the-mill stuff for Holland or Denmark, but almost unique in the UK. We’re really looking forward to seeing this in action. Work is due to finish at the end of April, which will be a big relief for the businesses on this stretch.

In the comments on these photos on the Better Streets for Enfield Facebook page, there was a sense of anticipation that we will see far more people willing to cycle on Green Lanes – because they will finally have a safe space to cycle in.