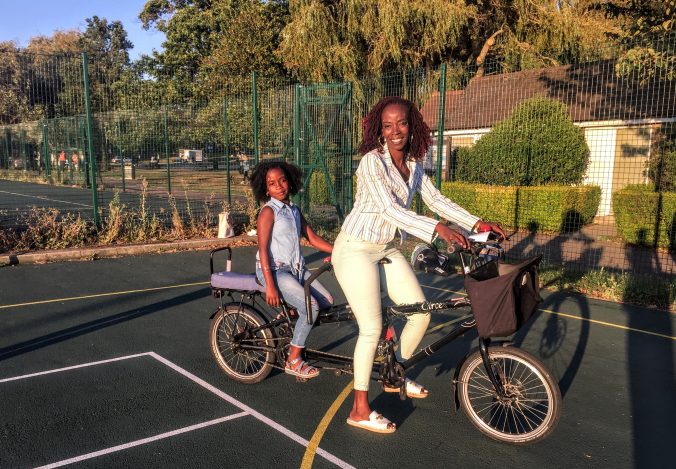 Mother, daughter and tandem at our try-a-bike event

On Sunday 1 September, Palmers Green Festival hosted the most well-attended try-a-bike event yet – with over 800 visitors.

Like last year, this event was run by Enfield Cycling Campaign on behalf of the council, with help from Better Streets members. Bikes were lent by our members and the council for the public to try for free. They were as varied as ever: e-bikes, folding bikes, road bikes, children’s bikes, a tandem, cargo bikes and plenty of other solutions for transporting children. We also had CarryMe Bikes staff demonstrating their family bikes and accessories.

We found a more streamlined way to manage visitors this year, but the sheer volume of people was incredible. So was the range of ethnicities and ages, from tiny children on balance bikes to those past retirement age.

When we finished crunching the numbers, we found that 822 people had visited the try-a-bike area. Our supervisors also recorded 475 separate rides. Because so many of the bikes take passengers, those 475 rides were enjoyed by 721 people – many of them children. And we have no doubt that in the excitement, plenty of other rides went unrecorded.

Some people bravely tried bikes who hadn’t cycled for decades. One woman told us that she had been put off cycling twenty years ago by the stress of sharing the road with motor traffic. On Sunday she tried a bike, loved it, and decided that now we have cycle lanes she’ll ride on them. Another visitor said he’ll now start cycling to work in the centre of London. And a mum who doesn’t drive is now hoping to get a cargo bike to take her child to nursery and do the weekly shopping.

This was exactly what the event was for – to show that cycling can be a realistic transport option. Even with shopping or children to carry, you don’t always need a car. Plus there’s the unexpected side effect: sheer joy.

Thank you to all our members who lent bikes or gave their time to help out. Thanks also to Enfield Cycling Campaign for staffing the event, and to Paul Findlow for organising it.