What a day! Celebrating the A105

Yesterday saw a day we have been looking forward to for a very long time – the launch of the completed A105 route through Enfield. The A105 (Green Lanes) now offers safe space for cycling all the way from Palmerston Crescent at the North Circular up to Enfield Town – a distance of over three miles. As well as bike lanes it’s got remodelled junctions, more planting, seating, new paving and decluttered town centres. It’s been transformed.

The launch was even better than we’d hoped. Not only did the rain hold off all afternoon, but more than 200 people of all ages turned up take part in riding and celebrating the new cycle lanes. What a day!

I joined one group of residents coming from Palmers Green and we gathered outside The Fox pub. 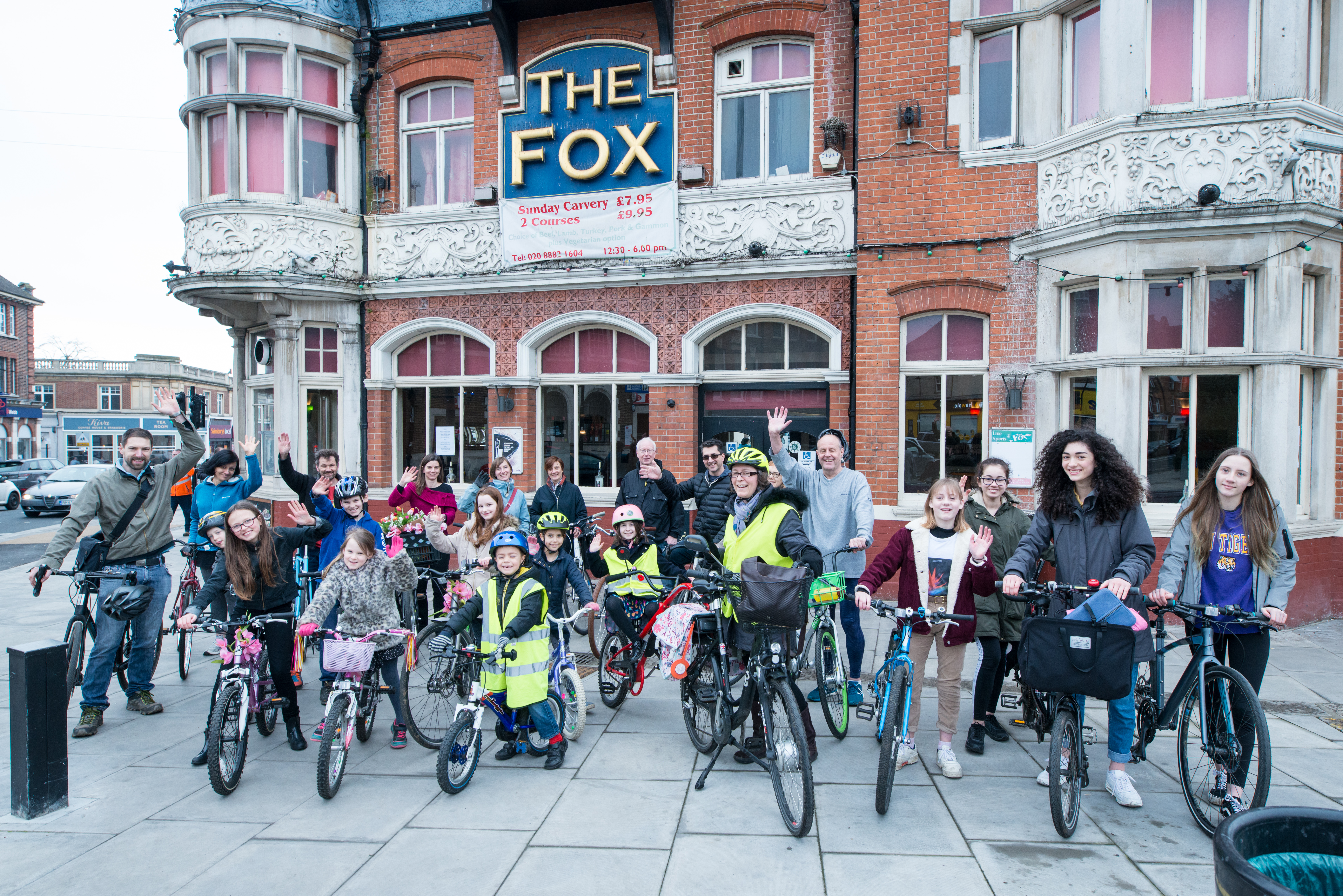 Raring to go – just before we started our ride up the cycle lanes to the launch in Winchmore Hill. (Photo: Phil Rogers)

We were joined by others just after this photo was taken, and by the time we reached the traffic lights at Sainsbury’s, we were a queue of 30 people on bikes. We stretched back so far it took three signal phases to get us all through! 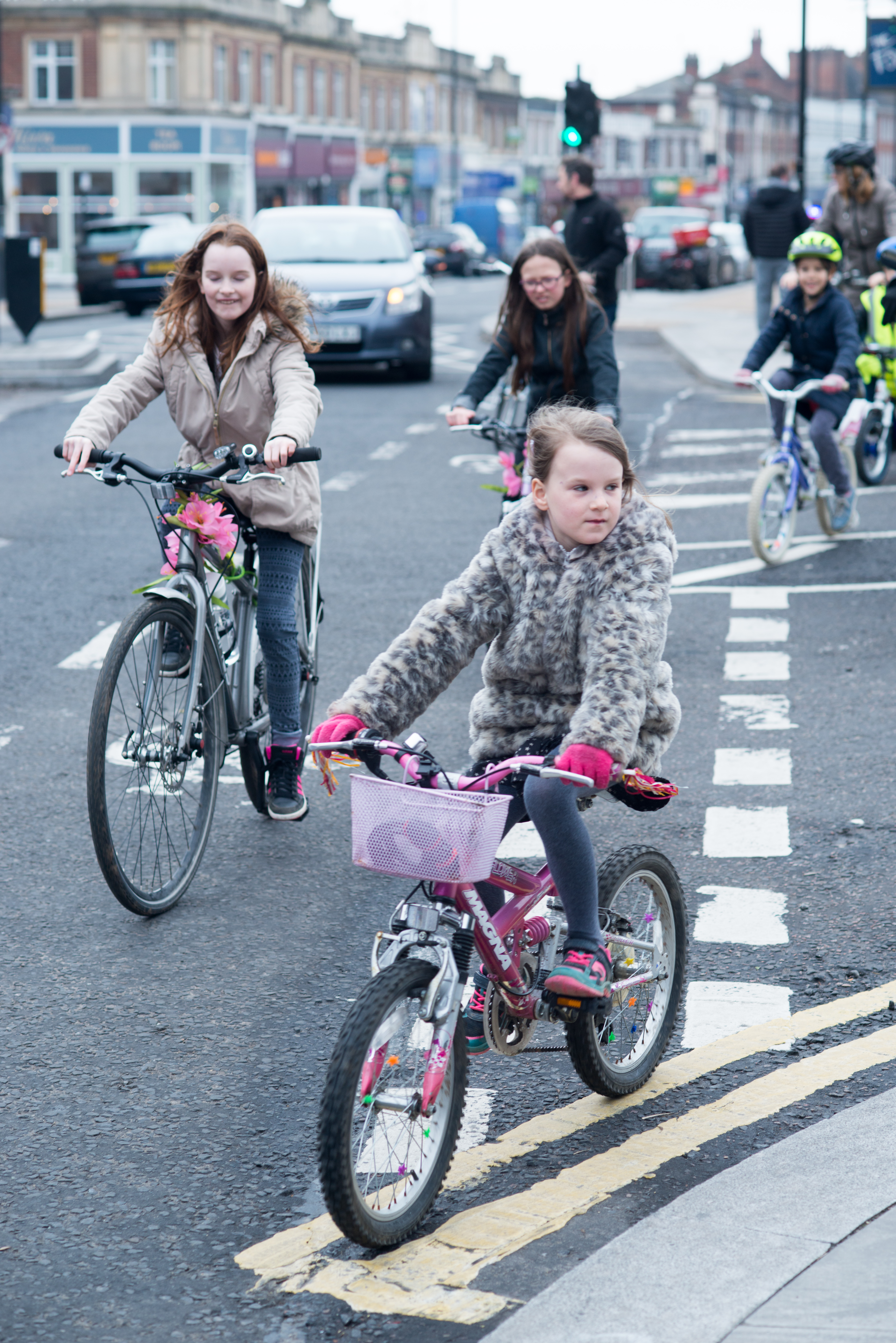 And we’re off – the new lanes feel safe enough even for a child to ride on.  Here’s a bit of cycle chic from the girls (Photo: Phil Rogers) 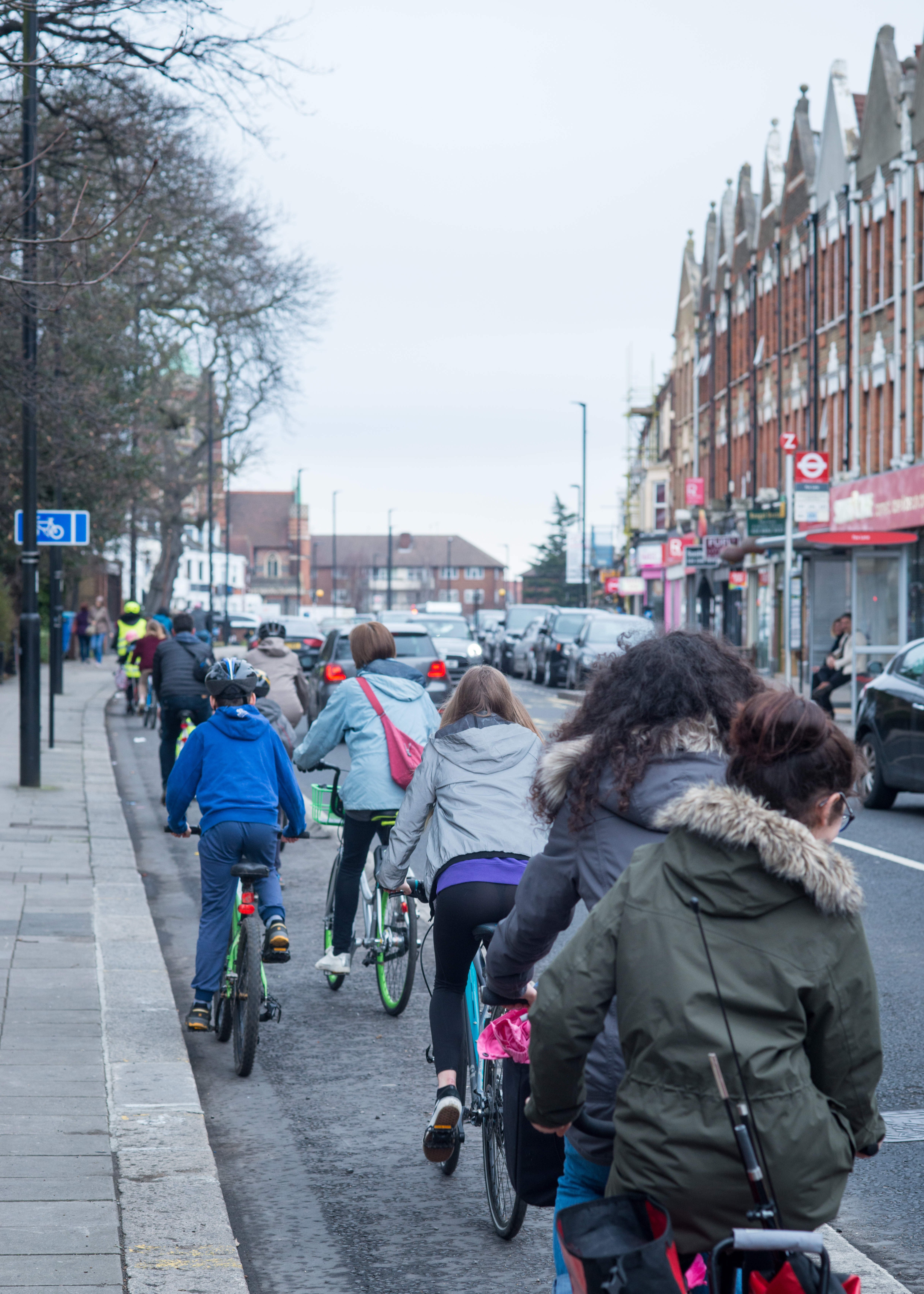 The two teenagers at the back are sharing a tandem (Photo: Phil Rogers)

The venue was a newly enlarged stretch of pavement outside Coffee Break in Winchmore Hill, where owner Ali and his staff were kept busy supplying free drinks in exchange for Cycle Enfield tokens. On a day that was already popular for Mother’s Day lunches, they did well to keep on top of it all and stay cheerful to boot. 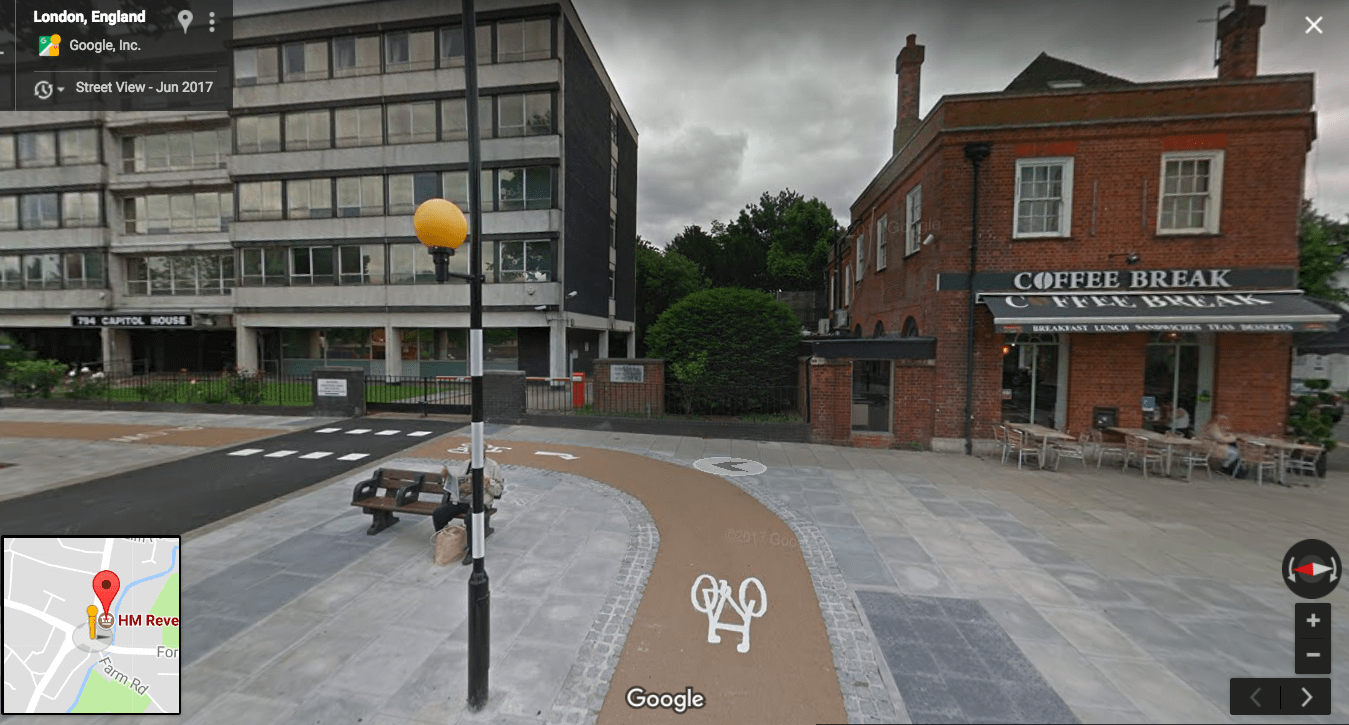 A Google Streetview image of Coffee Break just after the work was completed. It was a lot busier than this for the launch!

The event kicked off with three short speeches – first from Cllr Anderson, Enfield’s Cabinet Member for Environment and the main councillor responsible for the Cycle Enfield scheme. He described the aims of the scheme (regenerating three town centres, as well as making active travel possible for all in a borough with high levels of childhood obesity). He played down the considerable challenges he’s faced from a vociferous minority, and suggested that those claiming no one uses the bike lanes might need to go to Spec Savers… 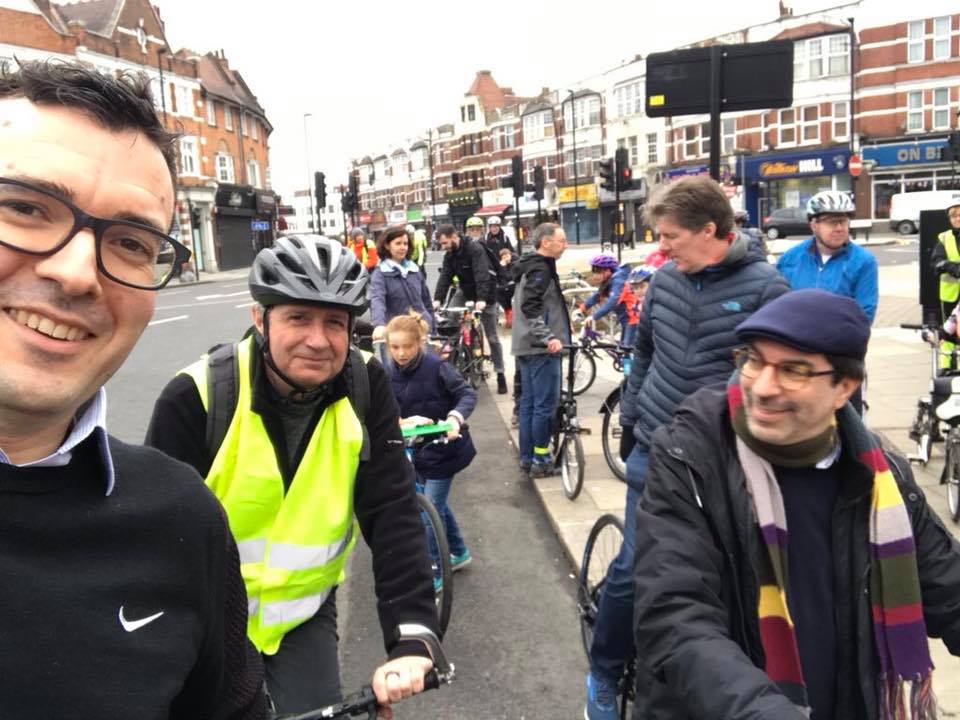 Will Norman, the Mayor of London’s Walking and Cycling Commissioner, was the next to speak, congratulating the council for seeing through such a transformative project in the face of all the challenges. He confirmed the Mayor’s commitment to schemes such as these, that makes cycling accessible to all. He also congratulated the many campaigners who have supported the scheme – that’s us!

I also got to speak briefly on behalf of Better Streets. My main message was: thank you. Not just thank you from us as campaigners, but on behalf of the one group of people who haven’t been to any public meetings or filled in consultations or written angry letters to the local press. These people will be affected by the scheme more than any other, but they have had virtually no say whatsoever. They are,  of course, our children. We are grateful for the cycle lanes – because they have given a once-hostile road back to our kids. 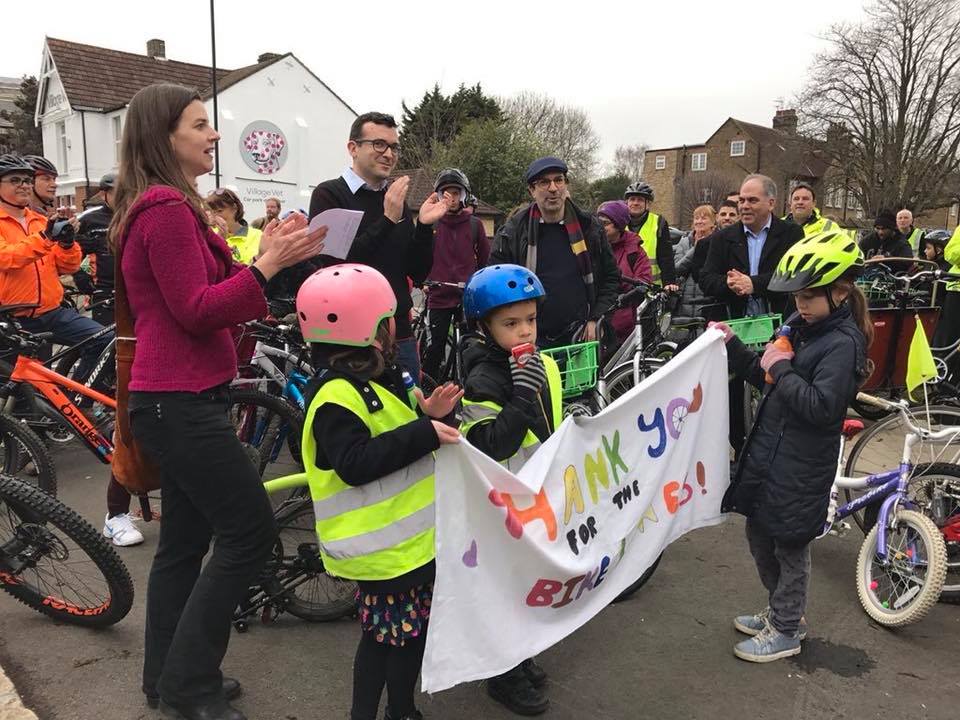 This is a pudding that’s hard to over-egg. I can’t emphasise enough how transformational this scheme will be, and is already proving to be. Proper bike infrastructure releases people of all ages to travel actively and independently, which is not only phenomenally good for our physical health (especially as we age),  but good for children’s social, mental, emotional and educational well-being. That’s why it’s so heartening that we’re starting to see secondary school children cycling themselves to and from school using the bike lanes. 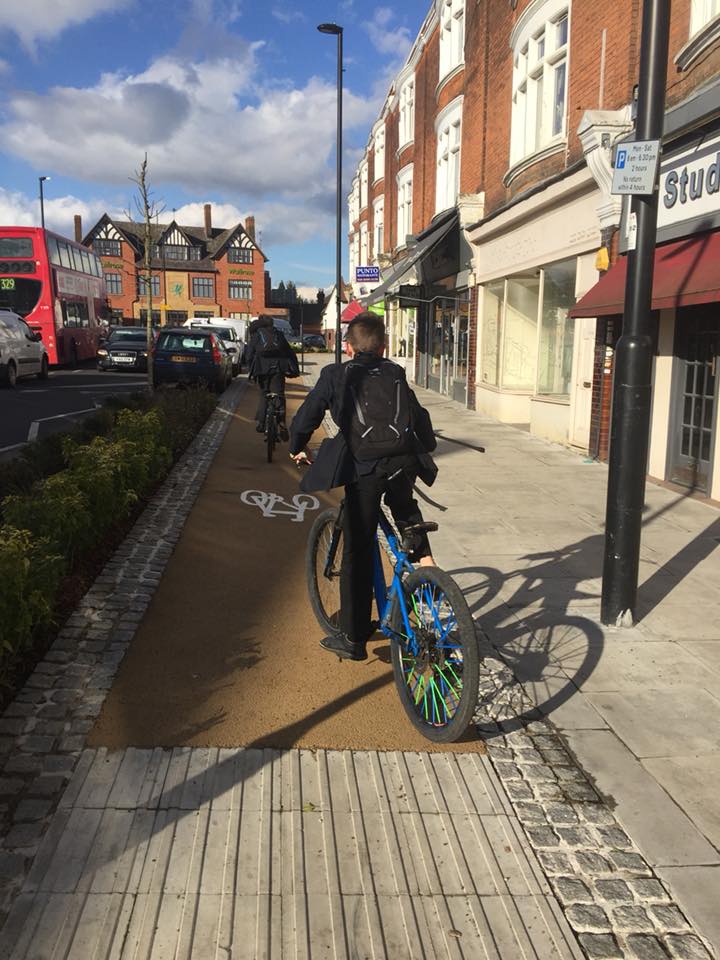 Maggie Westhead, who took her children for a ride in the council cargo bike, says this very eloquently in a tweet:

A wonderful Mother’s Day for me today. After years of waiting I finally got to cycle my children in safely segregated bike lanes though our neighbourhood. A very special moment. @CycleEnfield thank you pic.twitter.com/ze7k6xphGm

Our thanks was to the many talented and dedicated council officers, such as Richard Eason and David Taylor, and to councillors Doug Taylor, Daniel Anderson and many others for their political courage and leadership. As a token of our thanks, Maggie’s two daughters handed Cllr Anderson a bouquet (half of which were tulips, appropriately for a ‘Mini Holland’) from Pomegranate Flowers on Aldermans Hill, N13, and a bottle of sparkling wine from Enfield’s own Forty Hall Vineyard.

.@cllranderson receives some tulips from the children of Enfield for the new, protected tracks installed as part of @CycleEnfield. pic.twitter.com/BVtObHyEWT

Then the rides began. What followed was organised chaotic fun, with two different led and marshalled rides to choose between (one long, one short) on a loop of the cycle lanes. 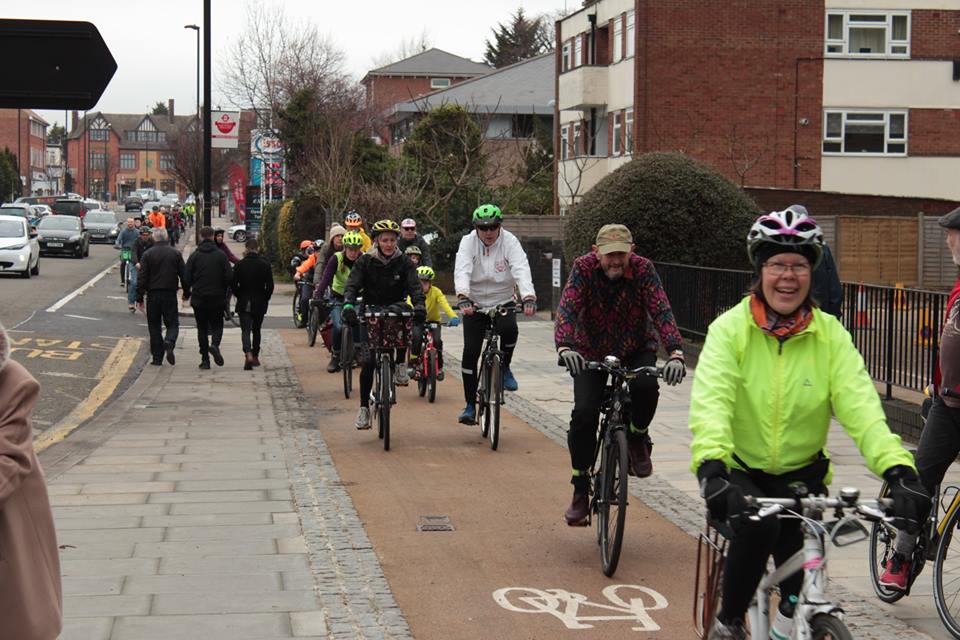 There is a span of over seven decades between the youngest and oldest riders in this photo (Photo: Ian Barnes)

We were marshalled by Cycle Confident instructors, who did a fantastic job of keeping the group together and making sure we got across each junction safely. Each group was a motley bunch of young and old, from really tiny children on (or trailed behind) parents’ bikes, to those on their own small bikes, to at least one man in his 80s. There was a trike borrowed from the Bush Hill park inclusive cycling scheme; the council cargo trike; and two tandems, including one ridden by Enfield Cycling Campaign member Oliver with his daughter pedalling on the recumbent section at the front.

You do hear stories of people getting abuse in Enfield simply for riding a bike. Not so on this day – people on the street waved and cheered and gave us thumbs up. Drivers tooted as if their team had won the football. There was a real sense of good will. As we passed the popular new (award-winning) Little Green Dragon micropub, a customer saluted us with his pint. Here’s what they were seeing from the inside:

In some ways the day felt like a reunion of the many people who have campaigned for the last few years in order to arrive at this moment. There are too many to mention here by name – we even had a group cycle over from our neighbouring Mini Holland in Waltham Forest for the event, who have been very supportive of our campaign. But that isn’t what made the day special. What made it special was the number of people of all ages who weren’t campaigners, but turned up simply to ride bikes. I spoke to one middle-aged man who hadn’t cycled since he was 15, then two years ago he started going on rides with Cycle Enfield, bought a bike through their scheme, and now cycles daily. I also spoke to a family who came because they’d seen the new Urbo bikes in Enfield Town and wanted to try them out – so mum and dad rode Urbos with their son on his own bike. Another man had lived in the area for 26 years but this was the first time he had cycled in Enfield (also on an Urbo).  I could go on.

It felt like witnessing the start of a revolution. A gentle, civilising, family-friendly revolution, but a revolution nonetheless.

What a great day.