Why 20mph really is plenty

One of our ‘asks’ as Better Streets for Enfield is a borough-wide 20mph zone where people live, work or shop. BSfE member Maggie Westhead explains why…

Death on our roads 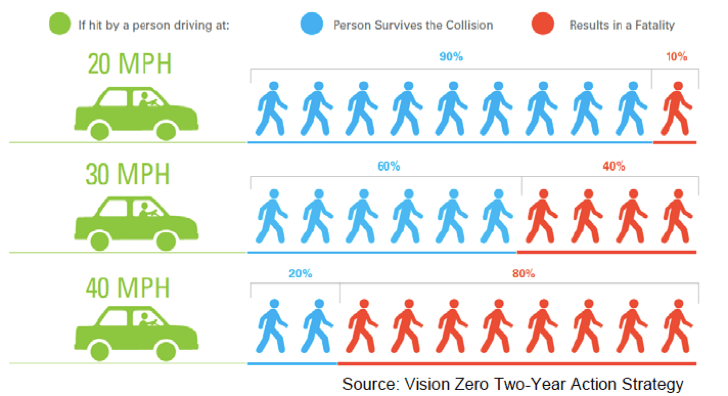 Recent statistics showing that 27,130 people were killed or seriously injured on UK roads in the year ending June 2017, with an increase in pedestrian and cyclist deaths, were sobering but hardly surprising. That figure includes more than one man, woman or child killed on the roads of our capital every week. The combination of more road users and increasingly distracted, careless drivers is a recipe for disaster. Dangerous drivers are putting lives at risk across the capital – and our borough – every day.

One of the easiest ways to curb this worrying increase, along with tackling the lethal issue of drivers being distracted by phones and other devices, is to implement speed restrictions. Like more and more countries around the world who have adopted 30km/ph (18.5mph) speed limits in urban areas it makes sense to have a borough-wide 20mph speed limit. If Islington and Haringey can do it, why not Enfield?

Having campaigned for the cycle lanes over the last two years, I’ve recently bought a bike and been tentatively trying out the lanes during quiet times of the day, taking my girls, aged six and eight, in the more safely segregated areas that run on pavements. It’s been exciting and exhilarating but has also made me realise that the cars, buses and HGVs travelling nearby, sometimes too nearby, at over 30mph feel way too fast. Do I feel confident enough to cycle with my 18-month-old boy on the back of my bike in the cycle lanes? No, not yet.

I have also regularly driven along the newly designed A105 – with its narrower carriageways and increased number of zebra crossings, keeping to 20mph feels the most instinctively safe speed along this heavily residential route. There are numerous doctors’ surgeries, shops and schools including St Anne’s, Highfield and Winchmore, and during secondary school opening and closing times, pupils often spill out onto the road. Teenagers are more likely to be killed on the roads than any other age group. Driving any more than 20mph during those times seem particularly irresponsible.

Let’s make our streets safer and more pleasant for all, with 20mph throughout Enfield’s urban areas.

You can see the full rationale for a 20mph limit on this page of our website, written by Twenty’s Plenty campaigner Jeremy Leach.