November 7, 2017 / admin / Comments Off on Quieter neighbourhoods under attack 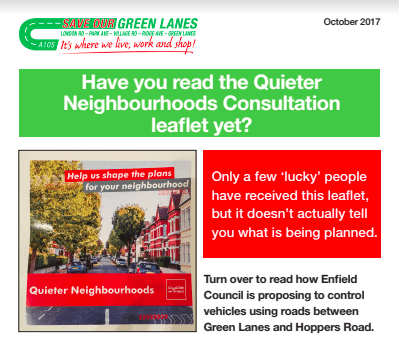 The ‘lucky people’ are the residents of the affected area

‘Save Our Green Lanes’ (SOGL) member Helen Osman has been busy attacking two of the Quieter Neighbourhood plans in her newsletter N21 Online.  SOGL are now distributing leaflets to households in both the Fernleigh Road and Fox Lane areas, encouraging a negative response to the consultations.  What are they upset about?

Fighting for the status quo

From the start of Enfield’s ‘Mini Holland’ programme, Save Our Green Lanes have seemed determined to keep things exactly as they are. Just as they fought change in the form of cycle lanes and renovated town centres along the A105, now they’re fighting change, however slight, to residential areas. And it’s always easy to stir up opposition to change. In one of their forums a woman wrote, “Our residential roads are just fine as they are. We don’t need 20mph zones and speed humps ruining our streets!”

But to us at Better Streets, the status quo seems very broken indeed. The status quo in our neighbourhoods is to breathe dirty air, to jump out of our skin as a speedster booms past, to witness collisions, to not know our neighbours and to fear riding a bicycle on any road. Seeing children play on the streets is a long-distant memory, except at organised play street events that close the road to traffic. We think it’s time to rethink what has become normal and give streets back to people again.

Helen claims that the plans will “create even more congestion on many roads”. She seems to be basing this on some mild measures such as banning a couple of left turns off Station Road for limited times of the week, a ‘point no entry’ on Stonard Road preventing drivers rat running down it in one direction only, and some one-way streets. Here’s the Better Streets feedback on the Fernleigh Road area plans.

It seems that Helen’s concern is not for the people who live on Stonard and other streets, but for those who’d like use them as a shortcut in their cars. Her assumption is that all residential roads should be open to traffic to take the pressure off main roads. In a way this is understandable – it seems logical, and we’re all used to taking shortcuts where possible. It’s the status quo. But At Better Streets we’re campaigning to stop rat running through residential areas; all the evidence shows that this actually reduces traffic overall, as well as opening streets to active travel for all. In many European countries that is the status quo.

In the Fernleigh Road area, Helen argues that the proposals will mean “parents in three schools will be badly affected, St Pauls, Palmers Green and Keble” … “Doesn’t anybody responsible for this scheme understand just how stressful it is having to get your child to school or nursery and then get yourself off to work?”

She presumably means that parents driving their children to school will be badly affected – and therefore access to these residential streets by car should be made as easy as possible. But right now, what’s hindering access to these schools by car is the sheer volume of other parents’ cars. Traffic on the school run is the bane of our streets. We need a way to reduce cars on the school run, not facilitate it.

Better Streets is fully in favour of banning cars from school streets at school run hours. Where ‘school streets’ have been created in Edinburgh, walking and cycling rates have gone through the roof – less convenient driving and less traffic on the roads mean that parents are happier about children travelling to school under their own steam. For parents going onwards to work, why the assumption that they have to drive? Often public transport and combined with walking and cycling are better modes  to get to work. If only those parents who had to drive did so, we’d see a lot less congestion.

SOGL can’t seem to fault the plans for the Fox Lane neighbourhood (here’s our response to Fox Lane ), so with both areas, they are falling back on a favourite tactic: attacking the consultation process. Helen criticised the Fernleigh Road QN for not consulting widely enough (which apparently meant not consulting those who don’t live in the affected area, but benefit from rat running through it).

What about the Fox Lane QN consultation? At over three weeks it’s a long enough period legally, it’s being advertised in the local press as it should legally (giving residents an opportunity to object), and like Fernleigh Road QN every affected household has received a leaflet. As one long-standing resident of the Fox Lane area commented:

“…we have seen an extraordinary level of hard and soft data capture, perception surveys and in particular 250 locals who volunteered to become engaged in helping find resolution [to the problems of traffic speed and volume in the area]. [In 2014] two workshops, with say 50 attendees each, worked towards an optimal solution.

This is possibly the most researched and widely consulted residential traffic area in London. What we certainly don’t need is more and longer consultation; now we are on the cusp of very long overdue action. It might not be perfect, at this stage, but it will be better… than what we have been forced to live with.”

The Quieter Neighbourhoods programme is not perfect and will not solve all traffic problems overnight, but it’s a big step in the right direction. Let’s engage with the council, support the process and push for a new status quo that is much better for everyone’s health and well-being.

Please respond to the Fernleigh Road QN consultation by Sunday 12 November and the Fox Lane QN by Sunday 26 November.

Crackdown on A10 speeding and cruising meets