Enfield council: please free us from our cars

Let’s face it – many of us in Enfield are addicted to our cars. We use them for all journeys, long and short, even trips we could have walked in five minutes. Are we just lazy? Or have we got into the habit because for many journeys, driving is not only the easiest way to travel, but actually the only viable option?

But now that we have blue bins right outside our front doors – and limited space in our black bins – most of us recycle. It’s been made convenient to do the right thing, so we do it.

The same applies to transport. We need the transport equivalent of the blue bin right outside our front doors. (We also need the black bin equivalent, because not every trip will work without a car.)

What is the blue bin equivalent? Healthy streets. Streets where you instinctively feel safe to walk, cycle, or wheel, no matter how young, old or disabled you are. You might get that feeling from a street that is so low in traffic, you find yourself strolling in the middle of the road. Or a street with plenty of traffic, but with safe crossings, wide pavements, and protected space for cycling. One or two of these streets don’t work in isolation. But when you have a network of low-traffic streets and safe main roads linked up across the borough, with every train station and bus stop easily reached by walking, cycling or wheeling, that’s your blue bin equivalent. Most local journeys won’t need a car.

Here’s an example. I live in a bit of Enfield where a patchwork of healthy streets has begun. Through traffic is removed from my neighbourhood, so on a street where thousands of drivers used to take a short cut, today I saw an elderly couple walking slowly along the middle of the road, and a father and young son riding home from the local primary school. I have lived in this neighbourhood for twenty years and I can tell you that before the council intervened, neither sight was even thinkable. No one would have walked in the middle of that road, of course, but even walking on the pavement was unpleasant, and there were many junctions with busy side roads to cross. Would that elderly couple have opted to go for a stroll in the area when traffic was rife? Or would they have driven to a park? And the father and young son coming from school on bikes – before, this was simply not an option. There was just too much traffic.

So the council has provided options that previously did not exist for many people. Driving is still possible, just as the black bins are still there, but now there are alternatives – for all ages and abilities.

We need this provision across Enfield. The statistics in the pockets of the borough that have healthy streets show a drop in car use and an increase in active travel. For those who haven’t got access to a car, or can’t drive at all (like all children) this must be a welcome liberation. And those who do have cars are clearly leaving them at home for some journeys. New habits are forming; the addiction is losing its hold.

If you agree, there’s an easy way to tell the council – use this form to send an email to all the party leaders in the local elections asking for ‘climate safe streets’, streets that allow more people to leave their cars at home: www.lcc.org.uk/enfield

What we said we do

END_OF_DOCUMENT_TOKEN_TO_BE_REPLACED

Ahead of the Enfield council elections on 5th May, we are asking each party to commit to five ‘asks’. The ‘asks’ are designed to encourage and support cycling and walking in Enfield – reducing pollution, noise and danger and helping people to get active. They will also help address the Council’s ambitious climate change goals:

If you’d like to email your next council leader to demand safer cycling and Climate Safe Streets in Enfield click here (it takes 2 minutes!)

We will update this page when we hear back from all the political parties.

Five years ago few people had heard of a “Low Traffic Neighbourhood” but that has all changed. Here Better Streets for Enfield member Clare Rogers gives a very personal account of her journey over the last few years.

All around me London’s streets have been changing. It’s been extraordinary to watch. We’ve seen healthy, civilised measures erupt into the world – like protected cycle lanes and low traffic neighbourhoods and roads closed for al fresco dining – accompanied by a storm of controversy. It’s like watching the Incredible Hulk in reverse. A deadly, monstrous road system has a fit, falls into a coma and then breaks out into spasms of healthy streets. Who would have thought…?

END_OF_DOCUMENT_TOKEN_TO_BE_REPLACED

November 22, 2021 / admin / Comments Off on How businesses can play their part in reducing traffic

Sam and Roberta run Hot Milk neighbourhood cafe in Bounds Green and here Sam explains how their business is adapting. Adapting, not only to the low traffic neighbourhood, but also the need for fewer deliveries. This is a really good example of how businesses can play their part in reducing traffic and so emissions on our roads.

‘Hot Milk is based in Haringey but we have ties with the borough of Enfield Borough through many of our customers. We have been very supportive of the Bowes Low Traffic Neighbourhood (LTN) since the beginning. As a business that receives many deliveries throughout the week, we had to look at the impact of the LTN. One of the first things we did was to investigate how we could get fewer deliveries. We started to consolidate in a number of ways. Firstly, we offered keys to all of our suppliers so that they could deliver during the night.

Our milk supplier was delivering every other day and we switched to a twice-weekly delivery. One less van on the road to us. We gave them keys to come during the night and they are able to put the milk in the fridge for us. They also now deliver all of our other dairy produce. We organised for our egg and smoked salmon delivery to be done by the same delivery company. Whilst they come during the day we have now limited what was a two drop to a single drop off.

Our pastry and bread come during the night – they have keys and are able to leave the pastry on our counter for us. Our dry store is now a fortnightly delivery and much of our fresh produce is coming from the local shops in Bounds Green. We discovered that they were using similar suppliers and we were able to support other local shops whilst providing a service for our customers. This is something that we are constantly working on, we are always trying to reduce the impact of our deliveries. Obviously the fewer deliveries we receive the better.

I also sometimes drive to the cash and carry, but my journeys there are limited and always planned not to be during the busy time on the road. I rarely encounter traffic by not driving at peak times.

Coffee Delivery
We have one coffee delivery per month. We now take 5kg bags which use less packaging than individual 1kg bags. We also run a subscription service and deliver these locally via bicycle. It’s much easier and faster to get around locally.

Passing Trade
Some groups opposing the LTN warned us of passing trade dropping but we would argue otherwise. Our trade is good and we are seeing cyclists, parents with prams, walkers, runners and more coming in every day. The idea that we are losing trade because people can’t drive here is madness. We’re a local heart of the community shop and want to be accessible to everyone.

One of the interesting things about the people we talk to every day is the absolute support that the LTN receives. People who walk here mention being able to walk here on a peaceful street which makes the journey more enjoyable. We’ve spoken to so many people who have offered words of support to the LTN. Not just parents, other businesses too who see the benefit of having fewer cars on the road. We have advised people to write to Enfield Council with their support but often know that with kids etc writing an email when they get home can be forgotten. We are very happy to pass on the many messages of support.

Bus Gate
We fully support the bus gate in Brownlow Road. The idea that people could sit outside drinking coffee and having less traffic while they do is dreamy.

To add, we are very supportive and would be very very saddened to lose the LTN. If anything we need to fight for more of these.’ 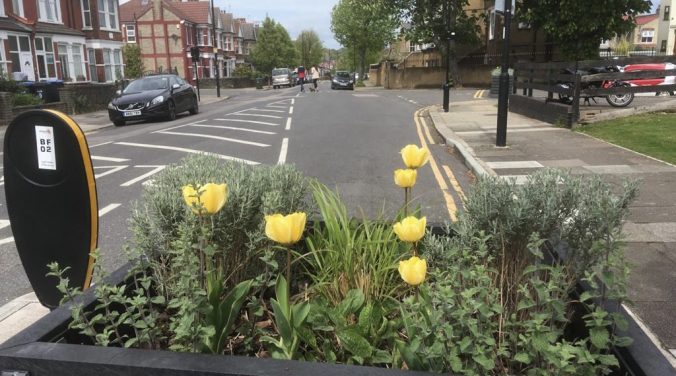 END_OF_DOCUMENT_TOKEN_TO_BE_REPLACED

Enfield Cycle Campaign and Better Streets for Enfield are running a Try-a-bike session in September as part of the Enfield Climate Festival. Are you new to cycling and want to give it a go? Perhaps you want to try a different type of bike, or find out how much easier it is to ride an electric bike? Do your children want to try a new bike or are new to cycling? There will be lots of different children’s bikes to try. Ever wondered what it is like to ride a delivery cargo bike? Want to see if you can take your kids to school using a ‘tag-a-long’, tandem or a ‘bakfiet’? This is your chance to give it a go. It kicks off at 1100 on 19th September in Hazelwood Recreation Ground and finishes at 1500.

Maybe you are already a cyclist and would like to help show people bikes? We need volunteers to help with the event, including:

If you can help with this great initiative to encourage people to cycle please email enfieldcyclingcampaign@gmail.com

There has been a more than fivefold increase in walking, and an even bigger increase in cycling, on Fox Lane since it became part of a low traffic neighbourhood (LTN), according to counts in 2018 and 2021.

END_OF_DOCUMENT_TOKEN_TO_BE_REPLACED

Are you a new or returning cyclist feeling nervous about riding on Enfield’s roads? Would you like to ride a bit further or make a journey to work or elsewhere that you have not been able to before? Or are you a confident cyclist who would like to help another rider experience the joy and freedom of getting about by bike? Enfield Cycling Campaign has joined the Cycle Buddies scheme, pairing up experienced and novice riders to provide support and share expertise. If you, or anyone you know (experienced or novice), is interested in signing up, CLICK HERE for the form to complete.

You can read all about Cycle Buddies and the experience of people who have buddied already on the London Cycling Campaign website HERE .