July 3, 2017 / admin / Comments Off on What does the Mayor’s Transport Strategy mean for Enfield?

On the 21 June the Mayor released a draft of his Transport Strategy, outlining plans for London’s streets up to 2041.  The main themes are very promising and line up with much of Better Streets’ manifesto vision and asks.

“London must become a city where walking, cycling and green public transport become the most appealing and practical choices for many more journeys. These active and sustainable transport choices not only support the health and wellbeing of Londoners, but also the city as a whole by reducing congestion and providing the most efficient use of valuable street space… We aim to change the transport mix across London, providing viable and attractive alternatives that will allow Londoners to reduce their dependence on private cars.”

This is in line with the ‘balance‘ we are calling for on Enfield’s streets, currently dominated by private cars at the expense of every other mode. The Mayor and Transport for London want to reduce London’s car journeys from 36% of all trips to 20% by 2041. One way they aim to achieve this is by ‘smart charging’ drivers – possibly per mile/minute, modified by time of day, engine size or emissions.

For cycling, the document recognises that the greatest growth potential is actually in outer London boroughs like ours. (A recent TfL survey of Enfield has shown that 80% of car trips could be cycled in half and hour or less – but the design of our streets means that few people are brave enough to do so). The strategy estimates that nearly 5 million journeys a day could be cycled in total across London, if conditions were good enough for people to feel comfortable to ride a bike. That means much more investment is needed to make cycling safe, and by 2041, the aim is for 70% of Londoners to be living within 400 metres of high-quality cycle infrastructure. Another ambition is for every Londoner to be active for at least 20 minutes a day.

In line with our call for safer streets, the Mayor has a ‘Vision Zero’-style ambition to end all road fatalities by 2050 – and for London buses, by 2030.

All of this sounds great, although campaigners have been getting frustrated with the time it’s taken to make changes on the ground. Some cycling schemes were all ready to go before Khan took office, and still haven’t started. So these promising words need to translate into action, and soon.

There is much more to the strategy than is outlined here – it’s worth reading at least the executive summary of the document itself. For a response from a cycling perspective, this LCC blog post is helpful. But one area that caught our attention for Enfield is about residential streets… 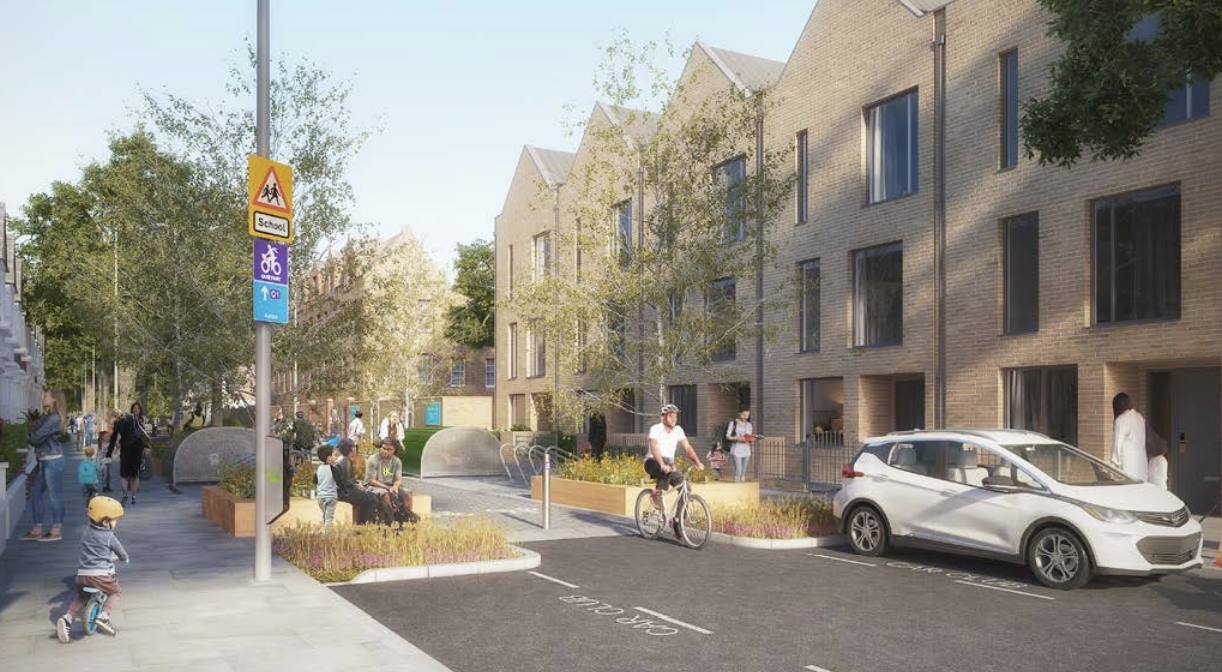 This image from the Mayor’s Transport Strategy is based on a street in one of Waltham Forest’s villages’ or low-traffic neighbourhoods. Bollards or planters prevent through traffic entering certain streets

Arguably, Better Streets’  most ambitious ask is to cut down traffic on residential streets and create ‘low-traffic neighbourhoods’ where children can play out and anyone can safely walk or cycle. The Mayor’s strategy strongly supports this idea:

“This will build upon the best of the programmes already underway in, for example, Walthamstow … aiming to reduce the volume of traffic through appropriate street closures, to develop streets as public spaces, and to discourage short car trips … creating vehicle-free zones, introducing ‘filtered permeability’ (so certain traffic is physically prevented from using specific streets) … Children can benefit the most from street closures and from safe and accessible footpath networks and other public spaces for active, independent travel and play.”

Maybe this means that, in order to receive Liveable Neighbourhood funding (the Mayor’s version of Mini Hollands) in the future, council designs for neighbourhoods will have to include these measures…?

At any rate, we hope that Enfield’s Quieter Neighbourhoods programme will at least begin to introduce some ‘appropriate street closures’, perhaps as trials in areas where residents have reported a lot of problem traffic. Traffic calming on its own won’t achieve the Mayor’s ambition to reduce the number of car journeys, or make street play possible for kids. Enfield council will need to show its considerable political courage once again if we are to see a transformation – not just some adjustments – on the streets where we live.